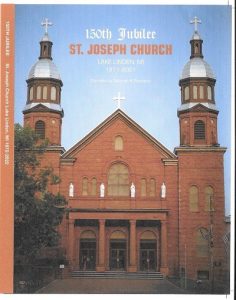 s a major voice in the writing of a UP literature, and I have been very interested in most of her work across several genres.  She keeps trying new things.  But history is a hard genre to get right.  History is all we have left after the ravages of time, and it is our only chance in writing to make good, general sense of the remains.  They must not be left just as a pile of chewed bones.  History is the chance to put the bones back into some order with general ideas and some sense from the historian.  Other historians may construct other general ideas and other sense. History then always becomes a debate of sorts.    But the obligation is there to make some sense.  Frontiera’s own review of Phil Bellfy’s U.P. Colony, posted as a UP Book Review in 2021, indicates that she is fully aware of this sort of general resonance, even theory, that is important in a full history of any topic.  So I am curious why she chose the more limited role of “compiler” and chronicler for this book. Probably, the publisher did not wish to embark on such a venture.  She seems devoted, however, to the topic of her parish history for this church at its “Jubilee.”  She is a very clever writer and has an academic background.  She taught writing in the schools.  What this book yearns for, in my opinion, is an articulation of a theory of the colony, a theory of generation and of the balances of the old with the new, an ambitious balance between the older European religious tradition that has been fostered in the parish and the Native American beliefs encountered by the French Canadians and other Christians as they came, originally, to proselytize.  Something rich and exciting has been taking place in Lake Linden over multiple generations in this parish (I think she says seven generations) as well as the centuries before by the French priests.  Such growth needs more analysis and interpretation.  The published results, also, ought to include a full bibliography as well as an index of ideas and concepts.

Much of that material is embedded. Her “Introduction” indicates how much work went into the compilation.  She even had help from another UP Writer with a doctoral degree, the poet Kathleen Carlton Johnson.  The 1921 version of this celebration of the Church was written entirely in French.  The language is there in the photos of the covers of these early texts.  I had hoped to see more of the French Canadian text itself, however.  As in any rich book of “jubilee” the quantity and quality of the photos is outstanding.  This is a beautiful publication, lovingly collected.  It is, in fact, a Program Book for an ongoing celebration; and it concludes with lists and descriptions of current workers in the parish.  In addition, it seems as though every priest and every nun who worked during the past 150 years is pictured.  I cannot emphasize enough how clearly organized this book is and how clearly written.  She organizes chapters by time periods and not just the members of the parish but the various buildings and locations in Lake Linden as well.  Frontiera is very good.  This is clearly one of her fine products for a UP Literature—a labor of love like a poem.  She confesses early and writes about herself in third person,

“The Church is the Body of Christ, and the PEOPLE are its story.  Doing this has been a humbling journey and Deborah hopes all readers enjoy it…. She also hopes that in another 50 years, someone else doing an update for the 200th year will find this work a good resource and place to begin.”

So after all, maybe the approach of the Venerable Bede and the other chroniclers is not such a “theoretical mistake” as I suggest at the start above.  I think much has, in fact, been dug up and well-displayed for the lover of history.