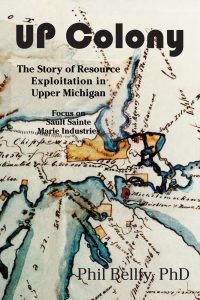 In U.P. Colony, Phil Belffy asked himself why Sault Ste.  Marie, Ontario, was doing so much better economically than Sault Ste. Marie, Michigan, some thirty-plus years ago and ended up writing his master’s thesis on that topic. His search for answers led him to compare the Upper Peninsula experience to the six-point paradigm of Pablo Gonzales-Casanova concerning colony development:

“1. The economy of an internal colony is structured to compliment that of the colonial center; 2. The ‘development’ is tied to one predominant sector; 3. The monopoly structure is controlled by one colonial center; 4. There exists an obvious disparity in the standards of living between colony and center; 5. There exists a repressive conflict-resolution structure; and 6. there is a tendency for existing inequalities to increase over time.” (from the author’s abstract at the start of the book)

As is typical of academic writing, the author then goes into great detail to explain these points and to prove his thesis that Michigan’s Upper Peninsula (and Sault St. Marie in particular) was an “internal colony” subject to financial interests in the lower peninsula, the Eastern Seaboard of the United States, and other areas. His statistics and examples show how companies outside the U.P. exported the area’s resources of furs, forests, copper, and iron for some 400 years, shipping resources away from the area for outside gain rather than true development of the Upper Peninsula.

Beginning in the 1600s, French, then British, and finally American John Jacob Astor, made millions shipping out furs without returning the tiniest fraction to the areas from which those furs came (and taking full advantage of the Native American population in the process). Once Michigan became a state, “downstate” interests dominated the Upper Peninsula. While many small companies began the copper and iron booms, they were eventually bought out (or died of themselves), creating monopolies controlled by out-of-area boards of directors who invested the money they “earned” in the U.P. in other operations elsewhere, then left when copper, iron, and timber played out, leaving the U.P. destitute. Bellfy demonstrates the same pattern in one city, Sault Ste. Marie, Michigan, and shows how the lack of other industries brought to the area do develop its resources affected the process. The author also shows how the pattern of exploitation continues today in a 2021 updated conclusion to his original thesis.

Extensive statistics demonstrate his point, and also bring out how the declining population (also a result of exploitive companies pulling out when resources dwindled) left the U.P. with less and less political clout and less ability to develop itself. In his detailed examination of Soo Ontario, the author states on pg. 47:

“Sault, Ontario, emerges as a partner to Canadian industry, sharing in the benefits accruing to industrialization, while the American Sault’s picture traces a path in history from a colonial trade center, through a new-colonial industrial age, and into the decline and decay in which it finds itself today.”

When publishing his book, all this time after his original thesis, the author picks up similar patterns in the last thirty-plus years. While academic reading may be “dry” for some readers, there are many people who will benefit from reading this book: academic readers and researchers; nonfiction writers working on similar themes; and more “creative” authors who want to get the facts straight, whatever their projects. The extensive bibliography will be helpful to many of these readers, too. UP Colony is a fairly quick read and easy to follow with its typical academic format of stating a premise/theory, organizing the points of the argument, supporting that argument with facts and statistics, and finally drawing a conclusion.