Troll Magic: Hidden Folk from the Mountains and Forests of Norway by Theodor Kittelsen, translated by Tiina Nunnally 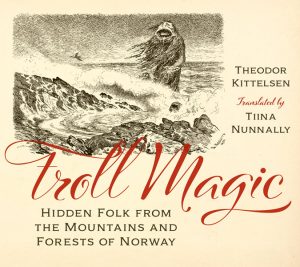 Having reviewed other titles originally from Norway, a novel and another book of folk tales that I thoroughly enjoyed, I jumped on the chance to review Troll Magic: Hidden Folk from the Mountains and Forests of Norway. I’ve always believed that folk and fairy tales are not necessarily for children. Many adults revel in such literature, but if you don’t like the genre, this book is not for you. Theodor Kittelsen was better known as an illustrator than as an author until much later in his life, and, as pointed out in the introductory translator’s note, his art shows “a tendency toward caricature and exaggeration, an unrestrained imagination, and a satirical depiction of human society disguised in animal forms.” At several points, I found myself wondering whether the story inspired the illustration, or the illustration inspired the story, and even more, did the illustrations come from what Theodor “saw” in dreams and nightmares? Yet, the translator notes that Kittelsen’s stories were quite different from those he illustrated earlier in his career. Artists are not always equally talented as writers and many writers can’t illustrate their own works. It is a rare thing for a person to be equally talented at both as Kittelsesn is.

At the beginning of the volume, the “stories” are single scenes or character sketches. For example, “The Forest Troll” is a vivid metaphor and uses personification. “And the forest gave us adventures. Huge and quiet, it came creeping, as if on soft, soundless cat paws. Everything that had been frozen in place began to move.” (Pg. 3) Another example is “The Fossegrim”, a prose poem about the water spirit—a “male” version of Greek Sirens, only this one has a fiddle to lure you over a cliff rather than a woman’s voice to lure sailors onto rocks. I wondered if Tolkien was inspired by “The Dragon” in this volume when he wrote The Hobbit. Several others have this same scene/sketch quality rather than the usual plot structure of a short story.

There are also traditional stories like “the Hulder” in which the braggart loses, or “The Witch” which seems to be a strange metaphor about knitting socks. Vivid description fills every page. The art in the story “On Mount Kolsaas” immediately brought to mind Disney’s rendition of “Night on Bald Mountain” in Fantasia. The heroine in this story makes a magical journey flying in a dresser drawer in which “She flew upside down so that it seemed to her the whole world was falling out of the dresser drawer and into a deep black hole below. The clouds were made of finest wool, and the moon tumbled from one cloud to the next, bright and polished shiny.” This story brings out a deeper message about gossipy women and who the witches really are.

Bits of humor can be found in “A Sea Troll” and “The Nøkk”, in which a farmer gets the better of the creature and puts it to work for him. The ending of “The Sea Serpent” adds meaning to the story with the vivid language: “Go ahead and sit out there in your Nordland boat on a gray and cold foggy day! The desolation and loneliness will wrap their straitjacket around you; they’ll teach you to count every grain of sand sliding down in the hourglass of your life. Then the monster will come, chasing across the rolling sea swells, the horror of the sea bottom, that ghastly sea serpent!” Another warning comes in “The Troll Bird” to the effect that no one should try to join the Troll Birds in disguise, because they will get you.

The examples of wonderful language, lesson and symbol could go on and on, but if I put all of them in the review, you wouldn’t need to read the book and would miss all the enjoyment. Troll Magic is the kind of book you will want to reread from time to time and see something you didn’t see the first time.