To China with Love by Michael Carrier 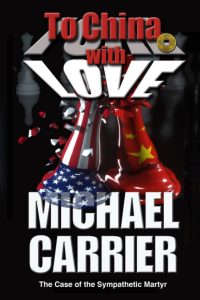 Jack Handler once again saves the world in Michael Carrier’s latest thriller, To China with Love. Carrier is the author of the Jack Handler books, which consist of two series, each with seven books. This latest book launches the third series, also intended to have seven books in it.

Readers of Carrier’s past novels have grown to love Jack Handler’s tough handling of criminals, occasional vigilante-style, and ability to get things done even when those who should be the good guys stand in his way. Jack owns a resort on Sugar Island in the St. Mary’s River, not far from Upper Michigan’s Sault Ste. Marie, but most of the time he seems to be off fighting terrorists, tracking down serial killers, or stopping threats to US national security. Jack is also the legal guardian of two teenage boys, Red and Robbie, and their dog Buddy. The boys often get themselves involved in Jack’s cases, though he does his best to keep them out of harm’s way, often having his daughter, Kate, a New York detective, look after them when he’s off on a secret mission.

In To China with Love, Carrier raises the stakes once more for Jack Handler. Carrier is never afraid to create terrifying scenarios for Jack to deal with. A bomb exploding at the Sault in his last novel seemed unfathomable enough, but now Carrier takes on COVID-19 as a topic, only raising the bar to even more desperate heights. Remember, Carrier writes fiction, so he has free license to do what he wants and create villains where there might be none. That said, he usually walks a very fine line in avoiding getting into political statements, even creating fictional presidents and not revealing which party they belong to. In this novel, however, he depicts COVID-19 as intentionally created by China as a biological weapon, and now Jack Handler learns a new strain, COVID-22, from which there is basically no recovery for those who contract it, is to be launched. Before he knows it, Jack is on another secret mission to China to stop the virus from being released before anyone can be exposed to it. Joining him is his friend Henry, a Native American whose aunt is ill with COVID-19 and who has to make the decision to leave her bedside to aid his best friend.

Meanwhile, Kate comes to watch over the boys. Jack takes every precaution before he leaves to make sure his actions will have no repercussions on those he loves, but the international criminals he has to deal with have no qualms in hurting others. Kate and the boys soon realize they are being watched, and unable to contact Jack while on his secret mission, they are forced to take matters into their own hands.

Carrier alternates plots between the boys and Kate at Sugar Island and Jack and Henry on their mission to Asia. Several other characters return from previous books, including Jack’s friend and fellow secret agent Roger Minsk and Bob Fullbright, former President of the United States. Jack’s death-defying actions in this book left me thinking it might really be over for him this time and it would be the end of the Jack Handler books, but I was reassured by the announcement that To China with Love is the first in a new series, so I held my breath while waiting for Jack to pull through. Fortunately, the book is such a page-turner that I did not have to wait long.

The end of the novel has a couple of big shockers I can’t reveal, one of them clarifying what the subtitle, “The Case of the Sympathetic Martyr” refers to. I can only say the chain of events leads to Jack getting into even more trouble, and while the good guys seem to have prevailed, threats still exist at the end of the novel that leave it open for future plot twists in adventures yet to come.

Fans of Michael Carrier’s previous novels will feel that Carrier is at the height of his game. Many authors’ novels become formulaic when they write numerous books with the same characters, leaving readers disappointed, but Carrier has taken it up yet another notch, and I can’t wait for the next book.

— Tyler R. Tichelaar, PhD and award-winning author of When Teddy Came to Town and Kawbawgam: The Chief, The Legend, The Man