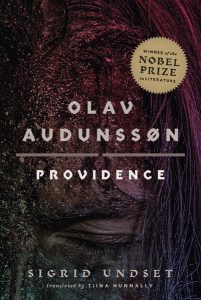 To begin this review, it is important to keep in mind that classic novels are very different from modern novels. Classics are short on action and “showing” scenes and long on backstory, detailed descriptions and explanations.  In Olav Audunssøn, the lengthy details revolve around the culture, traditions, and mythology of Norway in the early 1300s. This was a time when Norway was partly Christian and partly pagan, leaving behind the Viking era but struggling with the transition. Also, classic novels are not “page-turners” with fast action. While writing techniques of the classics might not be popular today, Singrid Undset’s use of language and of various points of view demonstrates why this author was awarded the Nobel Prize for Literature when this, and other of her novels, were first published in Norway in the mid to late 1920s.

The novel begins with the main character, Olav, and his return to his ancestral estate after many years in exile. He brings home Ingunn, the woman to whom he was betrothed to as a child, both of them carrying the burden of a dark legacy: betrayal, murder, and disgrace—a lot for two main characters to overcome. Both of them are steeped in personal guilt, afraid to confess, but grateful for the love they have for each other.  The author lays out the basic theme through Olav’s thoughts on page 28:

“Olav lay awake most of the night. He realized that he now understood one thing: a battle had been raging in Heaven between God and His Enemy since the dawn of time . . . and it was most often a man’s fear that allowed the Devil to tempt him into his fold. This happened when a man feared that God would demand too much of him . . . the ancient Father of   Lies would appear to capture the man’s soul with his bold assertion that he demanded less of those who sided with him and rewarded them better—for at least as long as it lasted, that is. Now Olav had to make his own choice regarding which army he wished to serve.”

Things seem to go well at first. The mistress is well-liked; Olav is happy; Ingunn becomes pregnant, but the son is stillborn. Ingunn takes this as her punishment for having betrayed Olav and giving birth to a bastard son whom she placed with foster parents. Olav is devastated but still hopeful. Ingunn becomes pregnant again, but while Olav is away on a military campaign, she loses that son as well. Despondent, Ingunn wishes for death and is jealous of other women’s babies. Olav also fears he’s being punished because he murdered that bastard child’s father. In spite of their love for each other, neither talks to the other about these issues.

Olav does take action to bring Ingunn’s son back to her, declaring the child to be his, still leaving the murder buried in the past. Oddly enough, this son, Eirik, rejects closeness with his mother, but embraces his newly-found father. Olav alternately loves and rejects Eirik. The confusion felt by Eirik is told beautifully from his point of view in Chapter 8. Finally, Ingunn gives birth to a live son, weak and sickly, who dies before his first birthday—more guilt and pain for both parents. In telling this, the author brings home the theme of the hell created when otherwise good people try to keep buried unconfessed sin, the problems caused by “secrets,” while never really communicating with each other in a culture of pure obedience and no discussion.

Ingunn finally gives birth to a healthy daughter, bringing temporary joy, but Olav compounds everything when he has an affair with his housekeeper while Ingunn is weak and sick. This results in another bastard son, so everybody involved is afraid. Ingunn is hurt by Olav’s betrayal; Olav, finally feeling like a “real” father, knows he must somehow provide for his mistress and her son; Eirik is afraid he and his mother will be turned out in favor of a “real” son. Both father and mother are caught in the culture of the times—if they confess publicly now, the law will not be kind to Ingunn, her son, or her and Olav’s daughter. Both must continue to live with their secrets in order to protect their innocent children.

This is a “slow” read which gives readers with plenty to think about and form their own conclusions as to what can happen to two flawed people trying to do the “right” thing. Olav is between the proverbial rock and hard place: he will never have peace, nor will he ever make Ingunn happy and, for her and the children’s sake, he must remain silent in his web of lies. Neither Greek tragedies nor Shakespeare could do better.