We Kept Our Towns Going: The Gossard Girls of Michigan’s Upper Peninsula by Phyllis Michael Wong 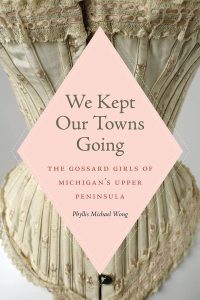 Across the history of Michigan’s Upper Peninsula in the industrial age, there have only been a handful of major employers in the private sector with more than 500 employees.  We are of course drawn to the big mining concerns such as Calumet & Hecla’s copper and Cleveland Cliffs Empire Mine in Marquette County.  In Chippewa  County, we remember Union Carbide (600 employees) and Northwestern Leather (850 employees) as documented in Phil Bellfy’s award-winning U.P. Colony.  Residents of Ishpeming and Gwinn know better, the Gossard Company employed upwards of 600 people in the women’s undergarment manufacturing business.  Maybe they are less often remembered because the plants were 90% staffed by women or perhaps it’s only because they closed almost 50 years ago.  Be that as it may, Phyllis Michael Wong has written the seminal work We Kept Our Towns Going: The Gossard Girls of Michigan’s Upper Peninsula which is now the definitive history of the Gossard Company in the U.P.

Wong’s brand-new book deserves to stand shoulder-to-shoulder with Allan Koski’s comprehensive Empire Mine Cascade Range: Michigan’s Largest Iron Mine as a document of immense sociological and historical importance in U.P. labor history.  Indeed, there is a fascinating synergy of the two industrial giants as many women signed up as Gossard Girls to manufacturer corsets, brassieres, and foundation garments when their husbands were involved in strikes at Empire Mine and other CCI job sites.  But let’s back up a bit first…  Wong’s quest to document the working life of Gossard Girls began in 2008 when she was a researcher at Northern Michigan University and would crystallize a few years later at Women’s History Month lecture where the idea for a comprehensive history was born.  Over the next 10 years, she would research primary sources, such as letters written by union organizers, but more importantly she took a staggering number of oral histories from the surviving women—nearly 100 are preserved. As such, she has knowledge at a system level of how the assembly line worked from top to bottom to produce complex products with up to 40 assembly steps.  But more importantly, she knows the unique human story behind the story—the motivations and trials of women who in the aggregate produced more than a million undergarments per year at the peak.

You may well ask, why Ishpeming given its distance of 370 miles from the main offices and rail hubs in Chicago?  Well, for industrial capitalism to work it requires three essential ingredients:  raw materials, cheap and hardworking labor force, and factories.  The raw materials for undergarments had a huge markup, the immigrants of central U.P. were long known for their work ethic, and the kicker was the 57,000 square foot available in Ishpeming for a fire sale price.  Indeed, the Gossard Girls story starts in the heart of downtown Ishpeming where F. Braastad and Company, the area’s largest department store, had just closed two years earlier.  The building barely 15 years old and built to the most modern standards could be easily adapted for assembly line work.

Given the time period and gender stereotypes, it was inevitable that the line workers would be all women.  But what did this mean for women of the era?  There were few realistic opportunities at all, other than secretarial work, for women and their high school vocational training emphasized the essentials:  typing, shorthand, and bookkeeping. The jobs that were out there for women, such as grocery store checkout, were very low-paying and far between.  The opportunity to earn minimum wage plus unlimited bonuses for piecework were too hard to turn down.  If worked your quota (number of pieces per shift), you got the basic minimum wage but if you excelled you would receive additional monies for each bundle you finished (12 to 36 garments) in your assembly step. Thus the truly gifted or just plain dogged could earn 2 or 3 times minimum and could even run a household with dignity as a single parent.

Let’s step back and take a look at the typical Gossard Girl.  Although the individuality of the circumstances is highlighted with dozens of oral histories in the book, I feel that I can summarize the mainstream experience.  Generalizations are always dicey, but I think it will illustrate given the space I have to talk here. Most Gossard Girls started immediately after high school, from 3 days to 3 months after graduation.  A few skirted labor laws by fudging their birthday by a year or two, often with the help of a friend of the family. Once employed, most stayed on the same machine that they trained on, such as a zigzag sewing machine or a 12-needle machine. They would work from about 2 to 5 years before getting married and leaving the labor force.  Then, there would be a 10 to 15 year gap while children were raised… and then they would return to Gossard to help buy extras for the family such as prom dresses, vacations or sending kids to college.  Many returned to work despite discouragement from their spouses but often enough due to a strike at the Empire Mine or other industrial concern where their spouse was removed from being breadwinner temporarily.  So they would stay on 10-15 years and perhaps shoot for the pension which could be claimed starting at age 62.

Women became the driving economic force in Ishpeming and to a lesser extent in the sister factory in Gwinn.  Thus, the title of the book We Kept Our Towns Going refers to the virtuous circle of earning and spending that let the town thrive and survive despite World War II, mining strikes, the Great Depression, and numerous other body blows to rural America. I highly recommend Phyllis Michael Wong’s book for anyone interested in the history of organized labor in Michigan or simply for the wonderful power of sisterhood and family feeling that such a close-knit and well-run industrial operation can create. She has singlehandedly produced a 50 plus year history of a remarkable time of empowerment for women in one of the harshest and most impoverished areas in rural America.