Home Biography / Women Tales from the Jan Van: Lessons on Life and Camping by Jan Kellis

Tales from the Jan Van: Lessons on Life and Camping by Jan Kellis 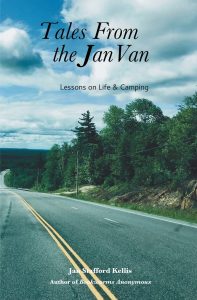 At age 45, Jan found herself at a crossroads when her orderly life drifted off course. A devastating divorce without warning and the sudden death of her mother made her realize it was time to make her dreams of road-tripping around the USA come true. Tales from the JanVan equal parts memoir, travel guide, inspirational story, and yes, a history of the motorhome in America!  In the true Midwestern spirit, Jan decided to reclaim happiness on her own terms, one mile at a time.

Perhaps the catalyzing moment for such a seemingly impulsive move to buy her own motorhome and a series of solo excursions was as mundane as a visit to her friend Sandy’s newly renovated kitchen.  An old-fashioned kitschy sign on the wall caught her eye with the inscription: “Enjoy yourself, it’s later than you think!”  Jan still had fond childhood memories of family trips in the Rolls K’Nardly, as her father christened it.  This beast was a vastly underpowered military surplus truck that would remind you of a UPS delivery truck at first sight.  But it was a labor of love for her dad as he had tricked it out with insulation, carpeting, a dinette, kitchenette, and bunkbeds and other motorhome-ish amenities. The coup de grâce was a bench seat covered in fake arctic fox fur near the front of the van behind the engine.  From this eclectic and improvised adventuring, the seeds were planted early. You can find the full story of Rolls K’Nardly in U.P. Reader Volume #2.  Jan writes:

Travel is my drug of choice. It’s more potent than caffeine and as addictive as heroin. It’s mood-altering, unfiltered, legal, and doesn’t require a prescription. It’s socially acceptable, non-fattening, non-allergenic, and non-hallucinogenic (except during road trips after 36 hours of driving). Fortunately, it’s also habit-forming.

If there is a travel gene, I have it. I was born traveling—Mom was three months along when Dad, a geophysicist, accepted a job prospecting for nickel in Australia. Much of the time, Dad had to live “out bush” in a primitive camp comprised of corrugated tin buildings and an outhouse or two. Mom sometimes joined him as the camp cook.

Jan’s Midwestern trips also form part of a recap of the history of motorhomes, as hinted earlier. She recounts a 1915 road trip featuring Thomas Edison and Henry Ford, no less!  With Edison’s penchant for inventing and Ford’s straightforward engineering, they evolved the concept quickly in just four years to include a two-truck caravan complete with refrigerator, and full built-in kitchen, furniture, tents, storage batteries, and room to carry a bevy of servants.

But all is not wine and roses for a single woman traveling solo in today’s high tech motorhomes.  Jan had to master complete knowledge of the electrical and plumbing systems including the black tank and the gray tank. She describes the wastewater management in meticulous detail:

To empty the tanks, remove the cover from the drain pipe near the rear of the rig and attach the sewer hose. Make sure the other end of it is securely inserted into the dump station tube. Open the valve for the black tank and let it drain completely. Flush the toilet a couple of times, or run water into the “black water rinse” hook-up if your RV has one, to rinse out the black tank. Open the gray tank valve and let it drain, then shut the black, then the gray valves before detaching the sewer hose from the RV. Rinse out the sewer hose—most dump stations offer a non-potable water hose for this purpose—and pack up.

She also had to manage getting service done for various in and out-of-warranty repairs on her beloved Class B motorhome, a 2004 model (the Forest River Cruiser) which cost her about $30,000 out of pocket.  As Jan explains,  the difference between Class A and B motorhomes is significant:

Class Bs are marketed to those who tend toward adventure; those more interested in experiences than in material wealth, who long to advertise their minimalist tendencies by taking extended vacations and/or living in their tiny rigs. If Class As are the RV equivalent of luxury condominiums, Class Bs are the tiny houses.

On the road, Jan has a ton of fun setting her own timeline, deciding what to leave in and what to leave out, without having to negotiate with a partner.  However, being a single woman she has to be on the lookout for creeps at all times.  She always has a “bug out” plan formulated, which could even involve driving off with hookups still attached!  There are a few close calls with men who stare incessantly or come around and can’t take a hint that they aren’t wanted.  And in one case she bluffs having a firearm at her disposal. Jan writes:

My security strategies are few: I remain aware of my surroundings and I carry pepper spray when I go hiking or biking. If I pull into a place that doesn’t feel safe, I leave. And I’m prepared to drive away, even if I’m set up and connected to utilities, if I feel threatened. I’ll happily sacrifice my electric cord, water hose, and sewer hose if necessary.

There’s much, much more, than I can write about here, including a surrealistic  FROG conference – Forest River Owners Group (FROG), her trip to Prince Edward Island to see Anne of Green Gables lore, and her rambles throughout New England.  Whether you’re an itinerant roadtripper or just an armchair traveler, Tales from the JanVan will transport you enjoyably through time and space and maybe give you an idea that you could go mobile too!