Home Poetry Lightness of being (poems), by t. kilgore splake

Lightness of being (poems), by t. kilgore splake

I think there is no argument that our writers who set themselves up as our poets are the real forerunners in language development.  Storytellers entertain us, historians order and give us useful general ideas, comic tone writers defend us against the many predators that lurk in the dark.  But it is the poet who forges for us the most profound uses of language.  Even Homer who worked well in the opening three modes above is known best as “poet.” 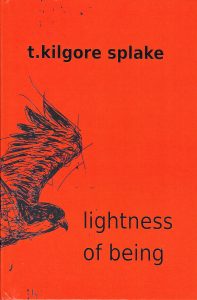 Overkill or over-exposure, however, even in this most sacred of human endeavors can be sad at the extremities of work.  Many of us are headed toward “hospice” care that is intended mostly to keep us comfortable at the end. We do not have those details about Homer, as far as I know—some scholars of the old Greek may have hints.  But the prolific Splake for the dedicated readers of the burgeoning UP literature does not hesitate to rest himself in hospice at the end.  He can be comic and funny in the forging and theft of his crazy fish name from Vonnegut, the science fiction writer. Science fiction writers are continually defending themselves against the dark predators between horror and extrapolation.  He can weave long stories about his biography and rebellion against the academic world and embrace of the Beat generation. In a way, he is one of the historians of the UP.  I think I have reviewed work of his dealing with all or most of the above.  Now in this classy hardcover collection of Haiku he seems to admit himself into hospice.  It is sad but it is poetic.

Hospice care precludes a lot with its prime purpose to provide comfortable rest.  In hospice one is not permitted to exercise the feet because of  the danger of falling.  In my own case, I love the obvious but shameful punning of the poetic feet with forbidden exercise in hospice.  This entire October 2022 volume from Splake never ventures beyond the three-line haikuesque verse.  Some are very good, but I have seen him use longer, more energetic measures.  This is a tired volume, however.  It begins and ends with evocations of two of his favorite Beats:

“restless kerouac soul
on the road miles
running away back home”  p 1. 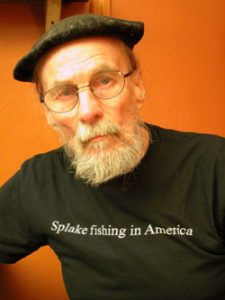 He sandwiches in between these two good bookends a lot that we already know about his flight from the academic world, about is devotion to nature and to the body and mostly about his hopes for poetry itself as well as for the UP.  He does not want to be forgotten.  But I think I prefer the more aggressive approach to the end of things that Dylan Thomas expressed, “Do not go gentle into…. Night/ Rage, rage against the dying of the light.” As I read it, Splake chooses the more hospice approach.  We shall see.