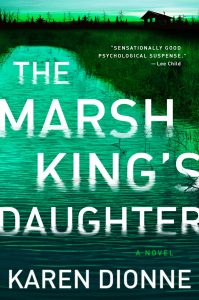 I think a writer develops a kind of cockiness that is helpful when he or she is accepted by the “teams” of publication in a culture.  The great poet Virgil was close to the Emperor Augustus.  Writers need patrons and mentors, and they need the teamwork of the “industry.” Walt Whitman realized this and sent an early printing of Leaves of Grass to Emerson who had set himself up as an authority with his essay on “The American Scholar”.  The gambit worked and Whitman grew. I begin my review this way because Karen Dionne has a polish and confidence in tone bolstered by her friends in downstate Michigan and her New York publisher.  She thanks several UP writers in the Detroit area whose names I recognize and who have, also, been picked up by mainstream agents and publishers.  In fact, as Dionne writes about the UP she reminds me of Jonathan Swift who needed to leave Ireland and move in with the hated English in order to have his voice heard.  Therefore the harsh competition in the writing world does seem analogous to Darwinian selection.  It is what it is. A tough world.  Dionne’s horror story fits well what we know of the UP, and it is very crafty in its telling. Her craft, then, produces fictive invention that may transcend the harsh Darwinian natural selection.  Clever telling softens the harsh reality.

As in Gulliver’s Travels, she uses a straightforward and seemingly innocent point of view speaker with no initial hints (just a few) of the huge buried secret lurking beneath the narration. The reader learns a lot about the UP from this very attractive speaker.  Helena is her name, and she contrasts her rather nervous marriage and motherhood in a civilized and more or less modern UP to her bug-infested upbringing out East near St, Ignace as a “wild child” in a remote cabin on a ridge above a marshy swamp—so much of the UP is marshland.  Her crazy and beloved father has raised her after she is born of her young mother who is the victim of a notorious kidnap by the stealthy father.  We are not told initially, but somehow Helena has been responsible for his arrest and imprisonment for the kidnap.  Nevertheless, she adores this strong father; and the contrast she narrates to her later civilized life gives the reader a great feel for the real UP in the old days with no electricity, with the marsh changes brutal and lovely during the course of the changing seasons.  She says “electricity” is the key factor.  During the long winter months the hours of daylight are a brief eight hours; during July and August this daylight doubles.  That is the real UP.  The “making” of wood,  the need to split enough for the long cold is another factor that Helena describes beautifully.  Her father is a masterful splitter of wood.  With absolutely no sexual component, he fascinates Helena and she adores him for his strength and power.  He is, also, a master at predation—a great stalker, hunter, and killer.  These are UP character traits that her civilized husband has none of in his makeup.  She is taught the predator traits by her father, and at that point the narration begins to shift toward the big lie and the big secret—just as Swift’s Gulliver changes by the end of his tale to the plaintive outcry of a madman who prefers horses to humans.

Dionne uses as her model the Hans Christian Andersen fairy-tale with the same title as her novel.  With Andersen the ambivalence of the daughter seems more deeply embedded in nature, the muck of the marshes: at night and rolling in the muck she is an ugly and horny frog whereas with the fertilizing rays of the sun she is a lovely Egyptian Princess.  Dionne is just as appreciative of Helena’s simple and spectacular beauty in her adoration and love for her Father—the essence of the UP strong man, the stealthy King.  But where Helena changes is in what her Father teaches her most thoroughly.  And it is not log splitting.  It is the hunt, stalking, predation, the kill.  This transition is much more profound than the night change and the muck of the frog.  It is the full predatory change of the Hunt.  Once her Father has used his own stealth to escape from prison, it is Helena who must track him, wrestle him, kill him.  So this story is a very grim and, I would conclude, an accurate characterization of the essence of the Marshes of the fecund, Darwinian upper peninsula.  Helena finally earns her Father’s respect and love by the hunt, the kill.  The result in the book is both an indictment of and a love story about the UP.  It is a well-crafted and awesome tale of human ambivalence in a harsh region of our planet.  And it is my highest compliment to say, finally, that crazy Swift could not have done better than Karen Dionne’s The Marsh King’s Daughter.