The Biting Cold by Matthew Hellman 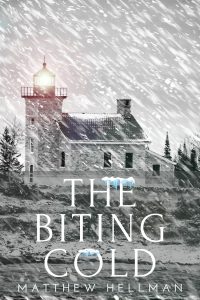 What is it about wintertime that lends itself so supplely to the horror genre? Beginning with Jack London’s “To Build a Fire” in 1908, the dangerous beauty of winter was driven home.  Now throw in a dash of the supernatural, as in John W. Campbell’s “Who Goes There?”, which inspired John Carpenter’s low-budget classic “The Thing” (1982) and you have a real recipe for edge-of-your-seat chills. Matthew Hellman builds on the winter-horror tradition with his latest novel “The Biting Cold”.  In 1842, the Ontonagon Boulder, an immense tonnage of float copper was removed from the eponymous county. That very same year, the Chippewa ceded all claims to 30,000 square miles of the Upper Peninsula to the United States Government. Hellman uses the purported disappearance of people in Copper Harbor in 1842 as the central mystery of “The Biting Cold”.  What did those Native Americans know that made them happy to be rid of Copper Harbor?

Hellman’s novel is that sub-genre of horror which you could call “man vs. creature”, and that’s all I’m going to say about the central conflict in order to avoid spoiling it for readers who take notice of this review. The novel has a large cast of characters from Copper Harbor and one research scientist Dr. Stephanie Crowe, an archaeology professor from Michigan Tech in Houghton. The action takes place entirely in the environs of Copper Harbor in 2019. The story opens as veteran charter boat pilot Bill Hitze has been reunited with 15 year-old-son Brandon for the first time in a decade. Following a bitter custody battle with his ex-wife who left for Minneapolis and denied all visitation rights, Bill never expected to see his son again. However, the death of Brandon’s mother Renee a few months earlier and the apathy of his stepfather Nick bring him back into Bill Hitze’s orbit once again.  Since the two have an extremely awkward relationship, one of Bill’s first moves is to introduce Brandon to the joys of fishing on Lake Superior. Almost immediately, Brandon snags a stray body part with his fishing hook and the mystery begins.

The novel begins in late summer and Hellman has a keen eye for detail in describing the real-life dangers of an everyday boating expedition on Lake Superior. He describes the danger both in terms of how fast things can go wrong and how severe the consequences of exposure in the big lake can be. Goaded by the aforementioned Dr. Crowe, Bill Hitze stays out just a few minutes too long to miss a Lake Superior thunderstorm and the harrowing level of detail had me mesmerized as he describes the near disaster between Hunter’s Point and Porter’s Island on the inbound trip. The result of more exploration determines that the infamous “lake that never gives up her dead” has preserved the body of one of those 1842 Copper Harbor casualties largely intact due to the depth and frigidity of the water.

Local crank and barfly Ernest Kearse has been selling the theory of a supernatural explanation for the 1942 disappearances at Jotnar’s Tavern and Brewery, the fictional heart of the Copper Harbor community in contemporary times. He hints of a larger cycle at play, perhaps with an interval of 175 years, meaning Copper Harbor is overdue for a calamity in the coming winter. Ernie doesn’t know what’s coming but he’s got a bad feeling about it and as events turn out he will be right, however, he will gain no satisfaction from that fact.

As the investigation proceeds throughout the rest of the summer and into the Fall, we learn more about this big cast of characters that will have to fight the impending disaster. Brandon falls under the sway of newly-minted millionaire resident and philanthropist Jeff Jansen.  As a game developer, Jansen is strictly a one-hit wonder whose mobile app “Rabid Turtles” was a huge overnight success.  He is desperate for a follow-up success but has neither the ideas nor the talent to pull it off. Jansen has no qualms about using Brandon as cheap labor to develop and test a game that Jansen will take 100% of the credit and money. Meanwhile, Brandon may actually be more interested in local girl Trillium (“Tril”), a competent outdoors-woman and the daughter of crunchy granola hippie parents. Their bond will be tested in the epic battle that the coming winter provides.

Outside of Copper Harbor, a few other locales are mentioned such as Calumet and Eagle Harbor. A key discovery takes place on top of Brockway Mountain which will serve as a secondary anchor in the action of the coming battle. The mountain it seems is concealing a series of important aspects of the evil to come including petroglyphs and huge sinkhole that threatens to swallow our two teenage protagonists.

Throughout the area during the ensuing winter, Hellman portrays snowmobile and snowshoe pursuit scenes with great detail and accuracy.  He has a penchant for introducing winter survival techniques and traps in just the right proportion and at just the right juncture in the storytelling. Even though I grew up watching snowmobile races outside Mackinaw City, I learned a thing or two about the dangers of handling a big machine in untracked snows, such as how it can dig itself into a hole in an unpacked snowbank.  If you enjoy a taut thriller in a single location where a group is trapped and must use every last portion of their wits to survive and outwit evil, then you should curl up with “The Biting Cold” and a warm blanket.