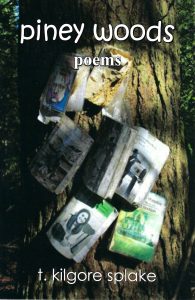 This is my third review in six months of the work of this trickster with the Vonnegut-stolen name (t. kilgore splake) in the context of the “new literature” of the UP, and I think finally I begin to see clearly the profound loneliness of his chosen role.  Whereas the more fiction and non-fiction I read and review the more evident to me is the overall role of the “poet” for the developing process of language.  The prose when it is good informs and entertains.  The verse drills down and uncovers resonance, mentorship, vulnerability.  The chosen mentor here, as Splake has told us before, is the Beat writer Richard Brautigan, dead by suicide, and a very lonely writer.  Splake makes it clear that just as the crisp and lovely photographs of book covers by Brautigan, old girlfriends, and a good “selfie” of himself standing by the posterboard of a pine tree will weather with time and disappear so, also, the literary task of emulation and preservation will decay with nature.

Nevertheless, the job of the poet is to preserve and to celebrate what he can of the tradition that has spawned him just as Nature has produced the “piney woods.”  I like Splake’s move in this 2022 chapbook to move out from the short haiku-type poems that elsewhere he has done in abundance to a long narrative poem that traces his roots from “Walden” through the 20th-century Beats and nature poets.  This is cast almost like blank verse and is about his “education” from a community college teacher in Battle Creek to the area around Calumet in the UP and from a clear awareness of community to loneliness in the woods. It runs from p.24 through p. 29.    The lines are short and not quite blank verse, and so echo the haiku,  but the ideas are uncharacteristically discursive. He is hesitant, but it is a change for him:

I think he is relearning again to teach and not just to emote.  I think I like this new, more literary Splake.  And it is a beautiful and well-produced volume.