The Ski Jumpers: A Novel by Peter Geye 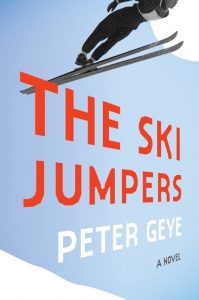 One of our great origin texts Genesis speaks of “giants in the earth” (chapter 6, I recall) prior to its own set of stories.  These ancient “fathers” may have included the light dinosaur flyers.  Some of the champion ski jumpers apparently make use of their trim springlike frames for the visionary high sailing and far seeing of the sport.  My notion from The Ski Jumpers by Peter Geye is that a similar trajectory upward and outward may represent an image that traces this fine novel in its characters and its geography toward a genuine place in UP literature.  The prime speaker is an English teacher who lives high on the bluffs in Duluth that look out toward the tip of Lake Superior below and the UP laying out from there.  He has just been diagnosed with Younger-Onset Alzheimers and so has little time left for him to “fly” his set of family stories.  He manages the flight brilliantly, however, and completes a set of stories with great polish.  All the characters in the family saga set of tales have Swede or Finn or Norwegian names; but the topics and variety of techniques are human universals and fictional virtuosity that range from disease, to love and loss of love, to education of wayward boys in the cities, to monstrous crime and jail time. The original patriarch of the family was a lightweight Chicago jumper linked to big city mobsters in the second family story.  This is followed by a crazy arc of narration with high vision to the Twin Cities and, eventually, to Duluth where the speaker meets his wife and teaches at St. Scholastica high above the sight of the UP.

I think the most artful chapter is the opening sort of prologue and user-friendly exposition in which Johannes speaks in the first person right after his diagnosis and laments that this final book of his may never get done.  He has so many family stories to tell and so little time and focus to craft them.  Like former President Ulysses S. Grant doing his wonderful Memoir in his last illness, the work does get done.  The novel with all these family stories is complete.  Hopefully, it is just fiction.  Johannes is not Geye.  And further, the classic topic of “telling the truth” in a fiction fits conveniently into the master image of the lightness and fragility of high flying.  I am not sure if this playfulness about the truth figures across UP literature.  But it is certainly present with this descendant of a poor Chicago flyer in his lifelong arch toward the North and the East.  Johannes captures well the skill and daring to make it work.  His art from story to story is just this delicate and adds to a clear philosophic high flying about lies versus truth.  I would hope that this is what a continuing UP literature can reach for.  There are roots in rugged and tough Chicago.  But the big leap, the big jump, has to be made toward more general ideas about the imagination.

In a fine later chapter as Johannes and his wife think back to the morning after the original diagnosis, “What will I do, Jon? What will we do?”  He answers, “You’ll love me. You’ll help me until you can’t. Which is exactly what I’d do for you.”….   “After that we’ll do what we’ve always done, or what you’ve always done: figure it out.”  (pp.306-307)

A few pages later, Jon writes,  “How unlucky I am, to never have believed in God.  To have instead put my faith in the lies Pops told me over that old kitchen table…. To have instead written my faith in the novels I have penned?” (310)  In order to figure it all out, or at least to this point, the protagonist here has had the flying ability to complete another novel which has the resonance and grace to reach significant heights as it looks out toward the North and East with a springlike mobility.  The Ski Jumpers should land well in the UP.