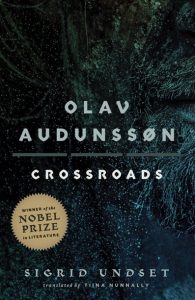 Crossroads is the third volume of four volumes by Sigrid Undset about medieval Norway, which earned the author a Nobel Prize in Literature at the time of their original release. Even though this is a “new” publication as an English translation, it is important to keep in mind that it is a classic novel. Classics differ from modern novels in that they have long sections of narration and description, slower action, and greater character development. Points of view are not limited; classics are nearly always third-person omniscient POV, providing the thoughts and motivations of several characters. While some might not enjoy the classics, this reviewer revels in the vivid descriptions of this author, who allows you to “see” the setting and the people she describes. Also, do not be discouraged by the fact that this is the third of a set. There is enough backstory to help a reader not feel lost if starting with this volume. A list of characters at the beginning helps readers keep track of who is who.

Crossroads opens with the main character, Olav (master of the estate), along with his son (around age 14) and younger daughter (around 6) grieving after the death of their mother/wife. In an age where people did not talk about their feelings, or have professional counselors to help them, the son retreats into an imaginary childhood world and the daughter is cared for by servants. The son also aggravates his father and others with his complex lies to gain attention. Olav basically ignores both children and jumps at the chance to travel to England on a trade trip, leaving his estate in the care of his employees. This quote from Pg. 9 let’s us know exactly what Olav is thinking:

“Of course he was going to travel. Deep inside his soul the decision had already been made, and he wouldn’t allow anything to prevent him from leaving. It was merely for the sake of appearances that he pretended he hadn’t yet made up his mind. He couldn’t very well admit that he’d allowed two complete strangers to persuade him so easily, when, in fact, he’d seized hold of their offer with both hands.”

The vividness of his voyage is described on pg. 26:

“On those long gray-lit summer nights when he kept watch—always with his mind and senses turned toward the sea and the sky, and in a state of alert stillness—he felt as if he were actually sailing away from the memories of endless vigil nights, when he’d lain imprisoned at the bottom of a dark bed in the pitch-dark cave of the alcove. Those memories now sank below the horizon behind him, just like the coastline from which he’d sailed.”

Readers also get a good view of London at the time:

“Church bells rang without ceasing, first from one direction and then another—deep resounding of large bells, the eager chiming of smaller ones. Then all the bells began ringing at the same time in one enormous reverberating choir. Taking into account all the cloister churches, along with the small parish churches, Olav reckoned there had to be more than fifty churches in London. At least ten of them were as big as Saint Halvard’s in Oslo. And St. Paul’s Cathedral was bigger than any church he’d ever seen.” (pg. 38)

Events during Olav’s visit to London also force him to search the depths of his own soul, analyzing the sins of his lifetime—which he can’t quite bring himself to speak of in Confession. He becomes lost in a forest on a pilgrimage to a country church, just as he is lost within himself. All this does him some good, though, as he is able to better relate to his son and daughter upon his return, at least for a time. In one of their better moments, readers see the night sky: “‘Look at the moon, Father,’ said Eirik. It was now about to set, a half-moon floating on its back above the spruce trees to the west, with several thin, gilded streaks of could underneath. Close behind hovered a big star, shining all alone in the pale blue sky.”

But this relationship between father and son does not last. Eirik, because he can’t seem to gain his father’s true affection or recognition of the fact that he has grown up, leaves home to align himself with a different lord. Once again, readers must remind themselves that the culture of the times affects everything and that we can’t judge the character’s actions with the mores of our day. There were times when this reviewer would like to have yelled at Olav to wake up and smell the coffee, but then reminded herself to learn about medieval times, not criticize them.

A few years after his son leaves, Olav acquires a foster daughter close in age to his daughter and that child’s grandmother because of the death of a friend. His daughter immediately loves her new sister and becomes the girl’s protector. The novel takes another turn as “the air smelled of snow” and a Swedish lord invades the area of Norway near where Olav lives. As in his youth, he must take up arms to defend his homeland. Even the local priest grabs his crossbow and armor. Vivid descriptions of two battles put readers right in the middle of it all. Gravely wounded but alive, readers will wonder whether Olav has also won the battle with himself. Will he return to his home and find it still standing? He’s now almost fifty years old. Will he gain some humility and accept old age? The author does not leave us “hanging” at the end, but there is the desire to read the last of the set when it has been translated and released.