Home Fiction / Mystery The Constipated Elephant: A Mystery at Pennington House, by A. Jay

The Constipated Elephant: A Mystery at Pennington House, by A. Jay 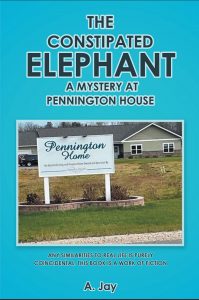 The Constipated Elephant: A Mystery at Pennington House by A. Jay may be one of the most confused storytelling piece of prose that I have read.  The emphasis on character and on the apparatus of the novel as “fantasy” rather than just history, however, makes it well worth discussing as an effort toward a literature of the UP. I believe that one indication of an evolving literature is that everyone, both inside the text and outside who control the text, values setting down their ideas in writing.  Shakespeare writes Hamlet , but the character himself keeps “his tablets.” Similarly, here everyone is a writer.  The author notes for the book identify Audrey J. Fick as a graduate in creative writing from Lake Superior State University who has done a lot of feature stories for the St. Ignace News.  She does tighten up and organize the storytelling near the end of the book when a major crime has been committed far South of Michigan and her main character is a suspect in the mind of her nurse at the assisted-living Pennington House in Pickford.

Claire Boudreaux celebrates her 100th birthday in 2037, but she can still drive well enough to get to Nashville, Tennessee where the crime occurs.  Her nurse Rosie is the main narrator who polishes up her book-length narrative of Claire’s long life based on interviews with Claire during the nursing.  Claire, also, has been a writer, mostly feature stories for her local paper just like A. Jay herself.  One of those news writings is interpolated by Rosie into her text near the end and gives us the “elephant” of the title.  Rosie herself is happily married (Claire’s several marriages are not so happy and the details of those in a sort of random order just like memory occupy most of Rosie’s manuscript up until the Nashville crime.  Rosie’s husband John is an FBI agent who solves the heinous crime exonerating Claire.

This review does not need for me to paraphrase the whole plot, but I do want to comment on the fictional removes as well as on the “political” elephant that Claire herself writes about so that the overall effect of the book may be more important than its difficult reading sounds.  The conceptual move in the book to set Claire’s birthday in 1937 so that the historical present of the story is way in the future seems to me nearly as interesting as A. Jay’s conception of all of her characters as writers.  Writers rule.  Old age, also, is conceptually important. Long lives provide more material for showing character.  Lear, with his daughters, and Satan, with all eternity, become characters who can seem more real to us than our own grandfathers or our own brother.

Finally, one of Claire’s last feature articles that was written a couple years before her 100th deals with preserving the individualism and character of her UP community from the ravages of a governmental “swamp.”  Rosie uses it in her manuscript.  Claire writes,

“Soon we were not to use female, male, mom, dad in our language. Our rights to freedom of speech were in jeopardy as well as the right to bear arms…. They came for our guns…. They came and took all our history books …. We were ordered not to do anything against the government, or it would be called treason.” Pp. 199-200.

This Big Conservative Elephant reminds me of Herman Melville’s use of Moby Dick.  Not sure whether it is mockery or advocacy.  But regardless of the politics in both A. Jay and in Melville, it is clear that a writer can bolster storytelling with “cave drawings” of fantastic creatures, and the drawings can enhance the effort to convey a sense of human character in the “fantasy” of fiction. This novel does not just tell us a story.  It has a little trouble with that.  What it does do well is self-consciously construct a literary work that transcends the notes and reporting of Claire as well as the interviewing and efforts at documentation of Rosie.  A. Jay folds herself nicely into the concepts of both these “writers” to make her book.  It is all located near Pickford in the Eastern UP.  Melville does his literary folding (much greater) working in Berkshire County, Massachusetts and sets the result across all the oceans.

The Constipated Elephant: A Mystery at Pennington House
by A. Jay
Covenant Books (2022)