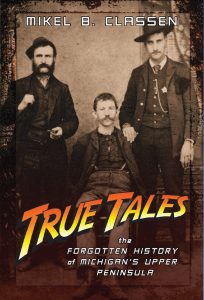 Mikel B. Classen’s book True Tales: The Forgotten History of Michigan’s Upper Peninsula provides historical information most of us do not know about or have forgotten. The Upper Peninsula (U.P.), a rugged, uncharted wilderness, haunted and delighted many through lawlessness, natural and man-made phenomenon. The man-made occurrences such as the terror of the stockades and the starvation on Isle Royale leave one feeling aghast at how horrible human behavior can be. Weather played a huge role with many of the shipwrecks. A copper boulder weighing tons got the attention of many self-acclaimed entrepreneurs. Native Americans carved their way into the history of the U.P. Lives of important people threatened by unlawful businessmen. A railroad that never reaches fruition and world-renowned photography. Classen accomplished his goal of informing the reader about forgotten history of the U.P.

To go into further detail about Classen’s book, he described the Ontonagon Boulder, a massive copper boulder. It served as the home of human sacrifices and brought attention to a copper rich territory which led to the “copper boom.” Many sought ownership of the boulder which ended up in various locations and eventually forgotten. Its notoriety resurfaced.

A pirate by the name of Seavey plundered many ships of unsuspecting captains and ended up on the other side of the law. Heroes paint a different picture. Many people owe their lives to the people who rescued them when stranded on Lake Superior during the colder months. People are still rescued today by fearless heroes. Many people, drawn to the Marquette area to seek gold, silver and copper, lost hope when the mines flooded. While seeking their fortunes they needed to be wary of wolves, bears, and cougars. Charlie and Angelique Mott relied on provisions being delivered; one died and the other barely survived while staying on Isle Royale. The $2,000,000 Iron Range and Huron Bay Railroad went unused after several years of construction and many hardships.

On the positive note, Grand Marais’ kidney-shaped bay has naturally served as a safe haven for ships during stormy weather. A safe harbor which has become unsafe due to neglect. However, the area has remained popular during the summer months and houses the Grand Marais Lighthouse Keeper’s Museum. Another popular feature discovered in U.P. history happens to be George Shiras the 3rd because he was one of the first photographers to take pictures of wildlife. National Geographic featured his work.

The chapter about the stockades of terror tells a whole different story about the history of the U.P. Classen was right, it’s not for the faint at heart but informs the reader about some real tragedies. Poor young women were captured, brutalized and sold. Chase Osborn and others tried to put an end to the illegal gangs and save the women. One of the main culprits served as a pastor and completely corrupted his daughter. The slave camps ran rampant and were prevalent throughout the U.P. and northern Wisconsin.

Classen described the art of the shamans and who was Mother Ontonagon. He went into detail about the trial and tragedy of the Steamer Myron and the sinking of the South Shore. The strange case of Reimund Holzhey was clearly delineated. Who was “Black Bart?”

Peter White happened to be the founder of Marquette. The library in Marquette was named after him. He not only founded Marquette, he was instrumental in getting the Sault Locks built, was a postmaster, and served as a legislator and state senator. While Marquette was still a frontier, he helped with preparing ground for a forge, machine shop, sawmill and coal house. He even lined up medical care at the little village and arranged a railroad service from Sault Ste. Marie to Marquette.

Classen accomplished what he set out to do, provide readers with interesting and true tales about the U.P. He did not romanticize the history and told bold facts to enlighten the reader. The U.P. was uncharted territory with harsh beginnings. Captains battled terrible storms while sailing on Lake Superior. Corrupt entrepreneurs made money off the suffering of young women. Classen rang bells for unsung heroes. Much can be learned about Chase Osborn’s efforts. The man who became the first governor of Michigan from the U.P. and Peter White, founder of Marquette. So much can be learned by reading Classen’s book. It is highly recommended.