Home Adult Fiction Having Faith: A Novel by Anne Miller

Having Faith: A Novel by Anne Miller 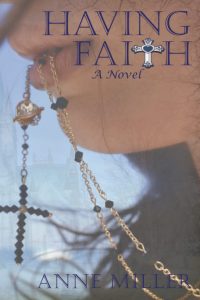 What would you do if your husband and best friend wanted to get married? That question might seem absurd, but it isn’t for Adrian Riley. You see, Adrian died in a car accident, and now her spirit is watching over her husband Jake and her best friend Cassie, who have come together, largely out of their love for her, and become a couple themselves. That’s the situation that begins Anne Miller’s new novel Having Faith, which is the sequel to her previous book The Last Photograph.

Adrian has become a guardian angel to her husband and best friend, and after overcoming a bit of jealousy in the previous book, she is their biggest cheerleader in trying to bring about their happiness. She also has a little help from Jake’s dad, Kevin, who is also a guardian and trying to make up for some of his past mistakes as a father by helping his son and showing Adrian the ropes of being a spirit and guardian angel.

Adrian and Kevin definitely have their work cut out for them. Cassie’s family is, to put it mildly, a piece of work. First and foremost, her mother, Julia, is a strict Catholic who wants Cassie to be married in a church, but she doesn’t like Jake and disapproves of Jake and Cassie living together. Marriage plans start to fall apart once Julia gets involved, forging new links in the chain of resentment that divides mother and daughter. 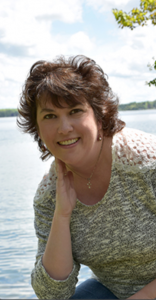 The novel also depicts the joy and sorrow of becoming pregnant only to suffer a miscarriage. In fact, the novel is dedicated to all those mothers who have gone through miscarriages. While we see the grief of more than one expectant mother in the novel, we also get a look at how men deal with their relationships and the loss of a child. Jake is, overall, a good guy, but he can also be stubborn, taking on that “Riley stance” that Adrian knows all too well and accuses Kevin of teaching his son. Both Adrian and Kevin have quite the job at times of getting Jake to come around and do the right thing.

Added to the story is a cast of supporting characters, including Charlie, Jake’s best friend, who is a womanizer and has a hard time learning from Jake’s mostly good example; Maggie, the tender-hearted bar owner who saves Cassie’s wedding; and Kathleen—not Kathy, not Katie, but Kathleen, who is the perfect evil sister-in-law to make Cassie miserable.

Oh, and guess what? The Big Guy Himself shows up in the book to set Adrian and Kevin right when they sometimes disagree with His plans for how everything will turn out.

Having Faith is a beautiful, heartwarming story for anyone who wants a fun, romantic read with realistic characters and situations, plus a touch of the paranormal. Think of it as George Burns’ Oh, God! movies meets The Ghost Whisperer meets the Hallmark Channel. Yes, there’s a happy ending, but getting there for the characters will require “having faith,” as Adrian says. I highly recommend both Having Faith and Miller’s first book, The Last Photograph. I hope Miller will turn it into a series, or at least write many more books.

For more information about Anne Miller and Having Faith, visit www.MillersLastPhotograph.com.

— Tyler R. Tichelaar, PhD and award-winning author of When Teddy Came to Town