Although I count myself a lifetime resident of Michigan, I confess that, for the better part of six decades, I had never heard the appellation “Sea Stacks” until this year, when I picked up the eponymous anthology of short stories by John (“J.L.”)  Hagen. This despite having driven by Castle Rock in St. Ignace probably on the order of three dozen times while transiting the Straits of Mackinac. Fortunately, the collection starts off with a poetic recounting of this geological feature:

In the beginning it all belonged to the Anishinaabe—the two expansive lakes; the tips of the two peninsulas that almost touched…. and, most of all, the sea stacks, pillars formed over eons from crushed and reformed breccia limestone, that jutted from the sandy shores, where the inhabitants could sit and contemplate all that was in their dominion and marvel at its vast verdant forests, crystal cobalt waters, and milky sky above. The greatest of these pillars was the one named for Manabozho—the Great Hare—from which the land derived its unspoken name. 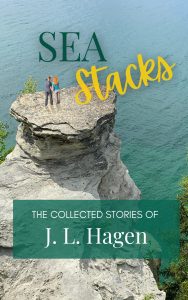 J.L. Hagen’s Sea Stacks, collection of ten stories (seven short stories, two novelettes, and a novella) take place in the environs of St. Ignace, Mackinac Island and a surrounding fictitious region named Ojibwa County. So convinced was I of its presence that I even tried to find Ojibwa County on a Michigan map! At any rate, Hagen’s love for the geography of Upper Michigan shows through in each story, and I was immediately reminded of Richard Hill’s short story cycle, West of the River, North of the Bridge, based a bit further north in Chippewa County and the Soo.  Like Hill’s stories, Sea Stacks may wander as far south as Grand Rapids or Battle Creek to fulfill its plots.

Thematically, Hagen’s stories range from unrequited love stories, to dramas that span decades to fully spin out, to pure excursions of humor. The love stories seem to bend towards a theme of “the one that got away.” The first story, “Jensen’s Barn,” strikes the most poignant note, although it is almost certainly one of the shortest in the collection. In this brief vignette, boy meets an indescribably beautiful girl, and in order to secure her affections, boy conspires to have the hired hand (who also admires said girl) wrongly fired. The ensuing tragedy marks his family for a generation, and the moral involves how quickly one bad decision can lead to unforeseen consequences.

The settings of the stories vary widely from the 1960s to present day. Many of them actually span the full distance through flashbacks.  Hagen has lived through these decades and this adds a layer of veracity to the storytelling. The realities of trying to make a living in small town America are highlighted accordingly.

In “Two Little Indians,” the longest story in the collection, Hagen tells us a tale of a struggling insurance salesman named Jeff, who falls for Jenna, a beautiful young social worker on her first job. In their meet-cute, they bump into each other on the ferry to Mackinac Island. Soon, they are head-over-heels in love – at least Jeff is, anyways. His opening gambit is a trip to a hidden sea stack where they consummate their love. Jenna’s most difficult assignment involves a truant at-risk Ojibwa boy and his brother. The single caretaker, his grandma, is “a living cadaver” and the two boys are on the verge of a one-way trip into foster care. Jeff volunteers to straighten out the young Native American boy, who hasn’t been to school in six weeks, with a “tough love” approach. Jeff makes remarkable progress until he loses his temper with the boy and causes a near-tragedy with consequences that will change his relationship with Jenna forever.

“Runtley Goes Rogue,” the second longest story in the collection at about 40 pages, follows the travails of Ed, his demanding wife, Margot, and their two boys as they adopt their first dog, Runtley. The story includes a big send-up of pedigree dog breeding and the difficulty of finding the dog of their dreams, the rare French, curly-haired, newt spaniel. The trek leads Ed as far south as Kentucky, where he ends up with the smallest, most sickly runt of a beagle litter, a decision he immediately regrets.  Thus, Runtley becomes one of the family, despite his epileptic fits that always end in dog vomit and diarrhea. Runtley’s penchant as a capable escape artist provides a never-ending source of grief and humor, especially after Runtley tangles with the sherriff of fictional Allowahegon County and his nepotistic staff.

The collection concludes with “Three Dances,” an epistolary story that unfolds as a forgotten folder of correspondence on a used laptop purchased from a stranger. The correspondents are Great Uncle Charley Lochting and his grand-nephew, Larry Thorsen. Uncle Charley fell in love with a German foreign exchange student over one steamy summer in the 1960s.  His father, an American World War II vet, would have none of it, and their final romantic encounter ends in a car wreck.  Thus begins a lifetime of longing for Charley, who never marries, and eventually pins his hopes on Larry as heir to his estate.  Will Larry be able to help Charley complete his unfinished business before Larry’s demise? You’ll have to read the story to find out for yourself.

J.L. Hagen’s Sea Stacks profiles the lives, loves and humor of residents of a small, Upper Michigan town. If you have a fondness for the St. Ignace area, or any part of rural Michigan, you may find something that rings true in Sea Stacks.