Nils by By Ingri and Edgar Parin d’Aulaire 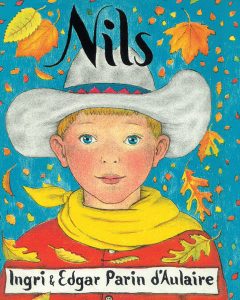 Even though this children’s picture book was originally published in 1946, this new edition of the original still has a great message for children today. Nils, a first generation American whose parents immigrated from Norway, receives a handmade pair of socks from his grandmother who is still in Norway. Nils loves the socks and quickly puts them on to wear to school—only to be teased by his classmates. Embarrassed, he retreats into himself and then goes to his favorite place, a huge bolder on top of a nearby hill, where he disposes of the socks on some twiggy trees trying to grow in a crack of the rock. As he awakes the following morning he hears voices whisper to him:

“An English boy helped his father build this house . . . ‘A Dutch boy helped his father build me’ [from the oven] . . . ‘An Italian boy planted us’ [from the grape arbor under his window] . . . ‘One for all and all for one,’ crowed the weather cock on top of the barn roof. ‘Those boys were regular fellows though they wore buckskin breeches, long stockings, and wooden shoes, and they helped to make this country great.’”

Nils then retrieves his socks and wears them with a bit more pride. Soon after when it is very cold, he’s especially glad he has those warm socks and no one is teasing him as they shiver. All these years later, immigrants are still coming (though these days they come from other parts of the world) and are still looked down upon by “more established American families”. The story serves as another reminder to this generation of children that they have come from a long line of immigrants and except for Native people, we all came from somewhere else! The story also reminds us of countless other children who try to hide their family’s culture instead of embracing it, and we all, as human beings, have the same hopes and dreams for our lives.

I would caution parents, teachers and other adults who read this wonderful story to children on one thing in the text. The second sentence in the book describes Nils as: “long-legged and gay and his schoolmates called him a regular fellow.” Adults might want to explain that language changes over the years and the word “gay” once meant “happy”. Most children these days know that the word has an entirely different connotation today—sadly.

The illustrations—some in black and white and many in full color—show the 1940s era clothing styles and such, but the richness of details in the drawings does not detract from the message. Most children might not even notice. Over all, Nils is a great book for children with a long-lasting message. Perhaps more children will take it to heart and pass on to their children the value of friendship without bullying and teasing.