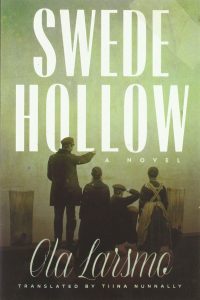 When we first meet the Klar family, Anna and Gustaf and their children Ellen, Elisabet, and Carl, we think that this may be the “head for America and grow rich” immigrant story. Far from it. In the same way that few high school athletes make it to pro sport’s big bucks, few immigrants made the big bucks either. Most of them struggled their whole lives so that they might leave their children slightly better off. Swede Hollow is a novel about “ordinary” people scrapping by in abject poverty and often running from their past.

The story begins in 1897 as the Klars flee Sweden with steerage-class tickets aboard The Mejesickt bound for New York. Among 800 other such passengers, they meet other Swedish families and struggle to get along with the Irish and other groups aboard. Language barriers are a theme throughout the book. Some of these families will continue to cross paths with the Klars.

Vivid descriptions from more than one point of view reveal the personalities of each family member. Here’s is an example from the oldest daughter Ellen’s viewpoint:

“She knew they were on their way to America . . . and that things would be better when they got there. There was something about her mother’s face, the way her mouth twitched, the way she let out a deep sigh. The way the lines at the corners of her eyes seemed to smooth out from the inside, for just a moment. The way she looked down at them, smiling. And the way Ellen herself wiggled a loose tooth with her tongue, and how important this all was.”

When they at last reach Ellis Island, I felt like I experienced the confusion, hunger, thirst and fear of not “getting in”, of being sent back to Sweden, that this family felt. Then came the description of the fire on Ellis Island, the rush of people to be evacuated to the mainland, only to be held out by another gate; Anna’s and Gustaf’s desperation to find a bit of food and water for their frightened children. This desperation grows worse for Gustaf in his decision to try to make it in New Youk, his inability to find a steady job or a decent place to live. All might have died if the Salvation Army member who often brought Anna a little food from time to time had not taken up a collection from other members and given Anna the money for train tickets for the whole family to join other Swedish families in a place called Swede Hollow in St. Paul, Minnesota.

The arrival at the St. Paul train station in November comes from Anna’s point of view:

“ . . . Anna and the children stood beneath the snow-covered roof next to the train station, which at least offered some protection from the weather, while Gustaf went to ask for directions. The whole station was dark . . . . A single lamp post glowed from the open space in front of the palace-like train station. The girls clung to her skirt, and Carl slept as she held him against her shoulder. . . . Gustaf came back, walking slowly with slumped shoulders, and Anna already knew what he would say. ‘Nothing’s open. There was nobody to ask. There’s a sign that says the station will open at five in the morning.’ She had no idea what time it was, though it had to be past midnight. Which meant five more yours until they could go inside to get warm, and they didn’t even know where they were.”

Finally finding Swede Hollow and a family there that they knew from the ship, Gustaf tries to provide for his family in one of the empty shacks of Swede Hollow. He finds only day labor, at $1.00 a day and less, while they look up out of the gully that is their home at the gracious Hamm Mansion above them, hoping, dreaming . . . while experiencing discrimination against Swedes in obtaining a steady job, hatred and distrust of the Irish, Germans, and Italians with whom they share the gully of Swede Hollow, and the perpetual language barriers between all the groups.

The author includes quotations from newspaper articles of the time to describe violence, murder and other difficulties faced by the people who live along the creek at the bottom of the gully—a creek that spreads disease every spring and summer since their outhouses empty into it. One such epidemic steals little Carl from them.

Tragedies continue to plague the Klar family, with only Ellen managing “escape”. On a dare from friends, she climbs over the fence of the Hamm Mansion one night to steal small glass balls out of the garden, run back and scale the fence again before the guard dogs sense her presence. The glass balls become touchstones in her effort to break free. The years go by and Ellen gets a job at a sewing factory, staying late to clean for an extra coin or two. In an office, she finds a typewriter and over many months, teaches herself to type accurately and rapidly—her ticket to a better job in Minneapolis and a husband of better means.

Vignettes of other characters help readers build a broad view of the many people who lived in Swede Hollow, while comical incidents here and there show a people of resourcefulness, faith and hope in spite of constant despair. But the final scene, in the “present” day, of a young man riding a bicycle through “Swede Hollow Park”, for the houses have long since been burned to the ground, makes it all worth it when the man stops and declares to the wind:

That is the tribute of this well-researched and excellently crafted novel—one that we should all ponder and never forget.