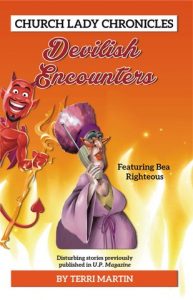 Terri Martin’s Devilish Encounters: Church Lady Chronicles is the first anthology of stories about the adventures of Bea Righteous, one of the busybody “church ladies” of the Budworm United Methodist Church (a.k.a. BUMC). Of course, seeing the title, I immediately expected something along the lines of Dana Carvey’s Saturday Night Live late 1980s character Enid Strict and her long cringe-worthy rants. There is a surface similarity, but Bea Righteous has a greater talent for sheer mass destruction in her purported desire to be helpful. First, let me back up a bit…these stories are anthologized from the humorous U.P. Magazine, published monthly by Porcupine Press (Chatham, MI). The stories are presented in chronological order, so you can get to know Bea and her zany cohort across a progression of story arcs.

The first half of the book focuses on Bea Righteous’ antics at the Gnarly Woods Senior Complex just outside the fictional town of Budworm, Michigan in the U.P. The 54 bewildered residents of Gnarly Woods bear the brunt of her misadventures. Terri will be the first to admit that the U.P.-exclusive content is not a major part of this story cycle. There are occasional nods, such as the Maki sisters, hunting camps, logging trucks and a summer church youth camp that might ring a few bells. But, by and large, it could’ve been set in Appalachia or upstate New York or any sufficiently rural area.

Now, Bea Righteous sees Satan just about everywhere and especially on those smartphones: “They were all looking at their wicked phones, talking in them or running their fingers over them like they were actual LIVING THINGS (her emphasis).” Indeed, she thinks she sees the devil himself taking a selfie with the deceased in a casket at a BUMC memorial service! When outraged, there is nothing Bea won’t do to combat the Evil One.

The stories are loosely connected, but each later story tends to build on elements of the earlier ones. For example, events are set in motion when the residents of the Gnarly Woods Senior Complex begin planning the annual Fall Frenzy, “a combination rummage/bake/craft sale with lunch.” The Fall Frenzy benefits primarily the Wayward Youth Bible Camp with its largesse. The camp, in turn, provides “a refreshing attitude adjustment” for these unfortunate teens by way of zero cellphone signal, a robust population of blood-sucking insects, outhouses, smoky campfires, etc. When a family of skunks, mistakenly adopted by a myopic resident as “kittens,” visits the Fall Frenzy, you could say all hell breaks loose. Bea yells out, “RUN BEFORE THE DEVIL PULLS YOU INTO THE FIRES OF HELL!” which is immediately interpreted by Helvi Lempi who repeats just the part about “RUN! FIRE!” and Bea’s first stampede is underway.

There is no limit to how much damage Bea Righteous can invoke by way of her misguided do-gooder activities. She personally takes on a mission to reform the miscreant boy, Sammy Snert.  The Snert family inhabits the Doobie Trailer and RV Park in the trashiest of circumstances, and Sammy has been advised by his juvenile probation officer to join the BUMC Youth 4 Christ (Y4C) group when Bea tries to take him under her wing. After Sammy tries to pilfer the offering basket, she takes to him with a vengeance. The summer project for the youth is the “What’s Growing in Your Garden of Virtue?” and Bea becomes Sammy’s personal gardening mentor. It’s probably not a huge surprise that it turns out that the Snert family is cultivating marijuana by the truckload. The TV-13 crew captures the big reveal at the BUMC Harvest of Virtue Bazaar as the Purple Kush rapidly sells out. The church gets 25% of the sale, which is pocketed by Bea Righteous and fuels her slot-machine binge in Las Vegas. The proceeds of Las Vegas are then parlayed to ever more outrageous adventures.

This is just a small taste of the whirlwind of chaos that surrounds our heroine, and if any of this has raised a chuckle, I think you’re a definite candidate for Devilish Encounters: Church Lady Chronicles.  And I know there are probably lots more to come from Terri Martin, as sure as Satan is in your cellphone!

The book is currently at Michigan Fair in Marquette, Da Yoopers Tourist Trap in Ishpeming, Hilltop Restaurant in L’Anse, North Wind Books at Finlandia in Hancock, Copper World in Calumet and also at Grandpa’s Barn in Copper Harbor, which may be closed for season. You can also email the author via  gnarlywoodspub@gmail.com to order.