The Women of the Copper Country by Mary Doria Russell

What happens when a female union activist confronts an intransigent mine operator? 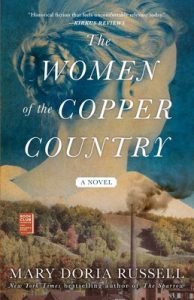 This is the story told by Mary Doria Russell in The Women of the Copper Country—A Novel. The focus is the 1913 Keweenaw Copper Strike, which started on July 23 and ended April 14, 1914.

The setting is Calumet, Michigan, a company town owned by the Calumet & Hecla Mining Company. Winter weather can be brutal there, and as if that weren’t enough, back in 1913-14, mining company tactics were beyond brutal, importing strikebreakers to beat and terrorize strikers.

The C&H was a sort of corporate Dr. Jeckyll and Mr. Hyde. It provided a library, schools, English classes, bathhouses, a swimming pool, medical services and land for churches and fraternal organizations – perks available in no other company town. Buildings were substantial—largely of sandstone and brick construction with attractive architectural designs.

In 1913, C&H significantly increased its demand on miners already angry about unsafe conditions, long hours and low wages. The company required that the two-man drill be replaced by a one-man drill, a move that substantially cut labor costs and greatly increased the danger to those working underground. When the miners went on strike, C&H took a stand not to negotiate with labor. For a time, mines were completely shut down.

Russell includes both historical figures and fictional characters in her story and skillfully builds each of them through physical descriptions and internal dialogue. She imbues Calumet residents with the mindset existing in the town in the early 1900s, sisu, a Finnish word for persistence and determination. The protagonist of the story, Anna Klobuchar Clements, is a shining example of sisu. Clements, a woman of formidable stature, spearheads the formation of the Women’s Auxiliary No. 15 of the Western Federation of Miners in Calumet.

The tall American daughter of tall Slovenian parents, Anna Klobuchar had topped six feet at [the age of] fifteen. . . .

Everybody stared . . . Look at the size of her! Oughta be in the sideshow with that bearded lady . . .

When Anna’s husband comes home late and drunk because a miner has died, she reacts silently.

There is a rage she feels all at once, like an overstressed machine suddenly going to pieces. Piston rods snapping. Drive belts flying. Bolts and gears fracturing. Iron housing tearing itself apart.

Despite conditions at the mine, Anna’s husband, Joe, has a less than favorable opinion of the union.

James MacNaughton, superintendent of the C&H, “is a man of iron habits . . .” In December 1913, Michigan’s governor, Woodbridge Ferris, sends Arthur Nolan, a lawyer and judge, to Calumet to urge MacNaughton to negotiate an end to the strike. During a hockey game at the unheated C&H arena – where temperatures dip below zero – he attempts to discuss the issue with MacNaughton. Upon Nolan’s return, he reports back to the governor.

“I tried to talk about the strike, but he’d say, ‘I do not negotiate.’ . . . If you could just see the children in that town—those kids are starving! . . . My balls were numb, but that bastard’s heart was even colder.”

Although no one seems to get through MacNaughton’s iron skin, my favorite dialogue takes place between him and Major Henry Van Den Broek, the officer in charge of the Michigan Guard sent to keep peace between the union and non-union factions. The Major has refused to stop a parade of women and children peacefully protesting against the C&H. MacNaughton calls him into his office to dress him down, and while doing so, he refers to the protestors as ignorant immigrant harridans. Here is what follows:

“I expect you to break up that mob and clear the streets—streets that this company owns. I’m afraid that you do not understand that every inch of this city belongs to Calumet & Hecla—”

“And yet, despite all the wealth of that company, you still rely on the taxpayers to pay for your refusal to negotiate the reasonable demands of—”

“Reasonable? Reasonable! Here is my wallet, sir!” [He slams it onto his desk.] “This is mine. The money in it is my money. I do not negotiate with those who wish to tell me how to spend that money. Nor do the stockholders . . .”

“Your family is from Canada, is it not? You were born there, I believe.”

“Who told you that?”

“I have lived in Michigan since I was three months old.”

“But . . . still an immigrant. . . . My own family has been here since 1643. My ancestors fought King George for their rights. And more recently, both of my grandfathers fought in the Civil War. On the side of the Union. . . Keep your wallet out, sir . . . I don’t think the state of Michigan will be paying your bills much longer.”

With The Women of the Copper Country, Mary Doria Russell captures the zeitgeist of the defining spirit of 1913-14 Calumet. Through Anna Clements, she takes the reader inside the Women’s Auxiliary to show how their opposition to management’s demands plays out on the streets of Calumet – sometimes peacefully, sometimes deadly. This is a gripping tale on a difficult topic that has been told by many. Yet, this version stands out because of its focus on women’s experiences during the conflict. Grab a copy. You won’t want to put it down.