Paranormal Activity on the Great Lakes 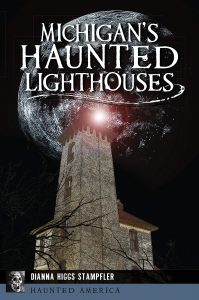 Michigan is home to the most lighthouses of any state in the USA, with 129 total lighthouses spread across both peninsulas on the Great Lakes.  Diana Higgs Stampfler is a seasoned Michigan historian who, for more than 20 years, has been looking into our great state’s historic lighthouses, agricultural heritage, covered bridges and vintage postcards.  The impetus for Michigan’s Haunted Lighthouses came from Diana’s touring presentation, “Michigan’s Ghostly Beacons,” which has been offered up and down the state, for several years now, at historical museums, libraries and civic centers. Her research is meticulous and includes a variety of sources from county historical death records to newspapers and lighthouse archives. Together, she has woven a narrative around 13 lighthouses more or less evenly distributed among Lake Superior, Lake Huron and Lake Michigan.  So, no matter where you live, there’s probably a haunted lighthouse or two within about 100 miles.  The western-most lighthouse covered in the U.P. is Big Bay lighthouse, about 25 miles out of Marquette.

At this point, you might well ask, “What constitutes a haunting?”  In Diana’s interviews with people who have experienced a haunting, including the U.P. Paranormal Research Society, this includes direct and indirect (e.g. in a mirror) sightings of ghosts, unexplained sounds and voices, doors slamming or locking on their own, furniture moved under its own volition, sensations of being lightly touched, sudden temperature drops, Electronic Voice Phenomenon (EVP) (where extremely low-volume voices are recorded) and even liquor being consumed!  Many of these I would, myself, consider poltergeist phenomena, but “ghost” is uniformly the nomenclature in Michigan’s Haunted Lighthouses.  Of course, to be haunted, there must be a departed spirit around, by definition.  In most cases, this role falls to a lighthouse keeper who died on the job. And since this was one of the 19th century’s most hazardous occupations (because light keepers did not merely “tend” lights but also were tasked with rowing boats for everything from buying groceries to rescuing sailors), there are plenty of candidates for most lights.  In a few cases, the spirits are attributed to the many sailors who died at sea in the area or young girls who met an early tragedy.  The most notorious of the latter is the case of 3-year-old Carol Ann Pomeranky, mauled to death by a bear outside a cabin some distance from Point Iroquois Light, near the Soo, in 1948.

Each lighthouse has its own dedicated chapter, about 10 pages more or less, that includes historical details such as dates and costs of construction, names and dates of the first light keepers (and often the most recent caretakers), along with a chronology of tragedy that might have led to the spirit’s restlessness.  Diana intuits that there are two basic reasons for a spiritual presence: those with unfinished business that cannot be resolved and those who genuinely love and care for the place where they perhaps spent the best decades of their lives.

One particularly awful lighthouse assignment really stood out to me and gave me the chills: the Waugoshance Shoal lighthouse in the straits of Mackinaw.  While most Michigan lights are on shore, this was the first light to be totally constructed completely surrounded by water.  It was so hazardous to make the passage that the first lighthouse keeper drowned less than four years on the job.  A few years later, John Herman, the chief keeper (and known prankster and drunkard) locked his assistant keeper in the tower – alone – for many hours.  The assistant eventually escaped by sending an SOS to another lighthouse in visual range.  However, John Herman did not survive that night, and his body was never found, so he never got his reprimand. It is believed he fell into Lake Michigan in a drunken stupor and was washed away.

The book abounds with eyewitness stories of contemporary visitors, docents and park service personnel.  Interestingly, their viewpoints span the whole gamut from total skepticism (in terms of never witnessing anything) to a woman with a personal connection to a former spouse who she firmly believes watches over the lighthouse and its people.  The author takes a mostly agnostic approach, although she hasn’t personally witnessed haunting on various overnight stays and short visits.  There is an emphasis on tourism, such as pointing out which lighthouses offer accommodations, when they are open, etc. so you can plan your ghostly visits.

With so much history and paranormal material to cover, Michigan’s Haunted Lighthouses is a little bit light on technical detail. If you don’t know whether a 3rd or 4th order Fresnel Lens is better, or why it was so difficult to keep steam-driven foghorns online, you might consider a book like Mikel B. Classen’s Au Sable Point Lighthouse: Beacon on Lake Superior’s Shipwreck Coast (History Press). However, if you’re looking for a collection of stories that will make your hair stand on end when the wind rattles your windows and the moon is full, Michigan’s Haunted Lighthouses is a great primer for learning about paranormal activities in your own neighborhood.