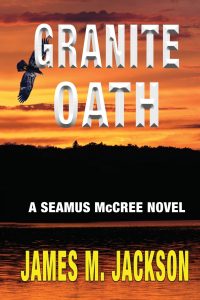 James M. Jackson painted a picture with “Granite Oath” of suspense and mystery about a missing woman, illicit drugs, prostitution and corrupt corporations. The location of the mishaps and tribulations occurred in the Upper Peninsula of Michigan (U.P.) which began deep in the woods with an abandoned, ransacked trailer near Iron Mountain. The other towns mentioned were Marquette, Baraga and Norway. Jackson lives at Madison, Wisconsin one part of each year and deep in the woods somewhere in the U.P. the other part of the year. The story took place during the summer months laced with mosquitoes, humidity, heavy rain and sunny days. Seamus and Niki served as a crime solving duo. Colleen, Seamus’ half-sister, worked under cover with them. The plot thickened when the criminals caught up to a group of weary and scared campers.

Two eight-year-old girls, Megan and Valeria, met at an art camp and became best friends. As a result of that friendship, Megan’s grandfather ended up putting his life and the life of his family and others in danger. Things could not be on the up and up because of Nana and her illegal status as a citizen. Nana, fearful of being deported, demanded to be hid from the law. Some of the law enforcement officers appeared to be working for the criminals. Seamus moved his charges from one isolated camp site to another while he tried to seek the whereabouts of Valeria’s missing mother. Meanwhile, Seamus’ home became the location of a crime scene with two dead bodies.

The major themes described throughout the book included loyalty, compassion, greed and corruption, self-sacrifice, the importance of friends and family, and good intentions which occurred at the risk of putting oneself in harm’s way. Seamus was driven to find Kat, Valeria’s mother, and broke the law on occasion to do so. In the end, his efforts uncovered a prostitution ring, illicit drug business and corrupt companies. However, his efforts were not commended and his approach to solving the mystery of the missing woman was in question. It reminded me of times when my good deeds were misread and how frustrating that was.

I liked the tenacity of Megan and her grandpa Seamus and the importance they placed on friends and family. A pinky promise represented their devotion to a grandmother, Nana, and her granddaughter, Valeria, and Seamus’ drive to solve what happened to Valeria’s mother. The book contained helpful details which led the reader to fully understand what was happening in the story. I especially liked the scenes when Megan and Valeria trained eagles to fetch fish.

The scenes in which Niki and Colleen filled the role of strippers seemed unbelievable. I could not picture a FBI agent stepping into that role to come up with evidence. Colleen also served as an accountant, her real job. There could have been a better way to infiltrate the club to meet with the strippers. Perhaps they could have been bartenders. Colleen was recognized by Bunny, one of the criminals, when she served as an accountant and stripper.

The book reminded me of the movie “Taken” which involved a father in search of his daughter and his drive to travel to various locations, not always safe places, to find his daughter. Seamus broke laws and went to unsafe locations in his effort to find Kat. Some of Michael Carrier’s books take place in the U.P. and his books involved murders and the bombing of a primary location in the U.P. Some of Carrier’s books that took place in the U.P. are: “Murder on Sugar Island,” “Superior Peril” and “Sault.” Karen Dionne’s book “The Wicked Sister” took place near Marquette and involved a psychopath who killed and tried to kill several people. “Granite Oath” had four known murders and one accidental one. Seamus accidentally killed one of the criminals and tried to bring her back to life.

“Granite Oath” brought the reader inside the corruption of drug and prostitution rings and how the criminals running these illicit businesses will stop at nothing to preserve their profits. Things were not what they seemed. Innocent women lost their lives as a result of the corruption by those with murderous intent. Seamus, Colleen and Niki put their lives on the line to protect the innocent. A little girl found happiness with her friend while missing her mother. Did Valeria ever see her mother alive again? I recommend this book for its spellbinding suspense and because of the demonstration of self-sacrifice, loyalty and some of the most heinous crimes against humanity.