The Dockporter by Dave McVeigh and Jim Bolone

The Dockporter by Dave McVeigh and Jim Bolone is a rollicking trip to Mackinac Island, that jewel of the Great Lakes that The Detroit News says sees more than 1 million visitors per year.  The island sees it all, from busloads of U.P. school kids on their long-awaited class trip to newlyweds to even more busloads of retirees. The visitors can generally be divided into two camps: the day-visitors who do a bit of biking or ride the ubiquitous horse-drawn tour carriages and those who stay overnight usually from 3 to 5 days. The overnight guests stay in hotels large and small, from the 400 room Grand Hotel to mid-size institutions like the Windermere and many smaller B&B type accommodations.  As in any operation of this size, thousands of people work in the shadows so that you can have a seamless and carefree visit. First among these are the bicycle-riding “Dockporters”, those brawny guys who revel in their ability to carry huge loads of bags on a single ride to your designated accommodation of choice.  Unless you’ve just moved to Michigan, you probably know that private automobiles were banned on Mackinac Island beginning in 1901.  Thus, the Dockporter is your first choice for moving luggage, the abhorrent alternative of pulling your Louis Vutton bags through crowded fudge shops and horse-manure laden streets is both unthinkable and unnecessary.

These Dockporters swarm to the docks like so many black flies and await the arrival of each and every ferry. Each one is clad in a polo shirt clearly identifying the hotel of his allegiance and greets the bewildered guests with a smile and assurance of an easy delivery so the family can roam the streets in search of fudge, souvenirs, and of course getting steeped in the centuries of history of Mackinac Island itself.  Although I’ve stayed on the island a handful of times, including my own honeymoon 32 years ago, we always booked the Grand Hotel which is the only destination that does not use Dockporters but rather has its own fleet of horse-drawn carriages endlessly cycling between docks and hotel. So this book was an introduction to this essential bastion of the tourism industry I had heretofore never known!  These brave riders work only for tips – a buck-a-bag was their suggested rate in the 1980s.

The Dockporter is a novel that takes place with Jack McGuinn, the Dockporter, on three different timelines that the authors deftly move between.  The story opens 1999 as he makes a nostalgic return as a successful fashion photographer at the age of 31,   It has been a full decade since he last schlepped a load of luggage and now he’s returning to attend the wedding of his estranged boyhood friend Gordon.  Although not formally invited, Jack has received a letter from Foster, his other boyhood pal, that Gordon is to be wed with Erin, the beautiful and talented young Irishwoman that Jack was madly in love with in his early 20s. This level of the plot bookends the other two timelines and pulls the reader onward throughout the novel.

On the surface, The Dockporter appears to be a straightforward quest for Jack to chase after the one-that-got-away.  Yes, but underneath it’s really a “bro-mance” of epic proportions. I say this not in a pejorative way but as way in for readers to understand the paradox of the both delicateness and toughness of male bonding. Young men on their own for the first time are invariably in search of a tribe. Whether this comes together as a result of shared military service or members of a college fraternity or in this case a brotherhood of bicycle porters, outcomes can be seen as similar:  comradeship, pranks and gibes to test their bonds, and simply getting down to the business at hand.

In this book, the Dockporters have a mythology of a man known to history as “Black Jack” because he performed the gravity-defying feat of balancing 21 different bags on a single bicycle ride.  In the quest portion of The Dockporter, which takes place in the 1989 timeline, our protagonist and narrator will be challenged to beat the outstanding hauling record which itself is carved into the very docks itself.

A second layer of bromance is the love between generations of the men of the McGuinn family, in a semblance somewhat akin the three generations (grandfather, father, son) in John D. Haske’s novel North Dixie Highway. The eldest McGuin was a World War II pilot whose claim to fame is buying a cottage on the east bluff for a pittance in the early 1950s.  His son, known only as “Big Jack”, now owns a struggling Oldsmobile dealership and makes the 5 hour commute to the island most weekends. Big Jack is desperate to motivate twenty-year-old Jack McGuinn into the dealership before it hits the rocks.  However, Jack McGuinn has no life plan in the 1989 timeline and he’s content with the seasonal work of a Dockporter.

Lest you think I’m spoiling the story, the bricks and mortar of the novel as described so far merely get us into the first few chapters. Inside the book, is a ton of authentic detail that anyone who has ever visited the island will recognize and locals will delight in.  There are familiar hotels, churches, bars, island landmarks, and even Doud’s Grocery makes an appearance.  The redoubtable Straits of Mackinac II ferry plays its part as well, contrasted with the sexier hydroplanes. The Dockporter is a joyful and funny island coming-of-age romance that will captivate you from the first page in the same way the thrill of your vacation starts as soon as you set foot on the ferry.  It’s a 2022 Michigan Notable Books pick so you can probably find it at your local library too! 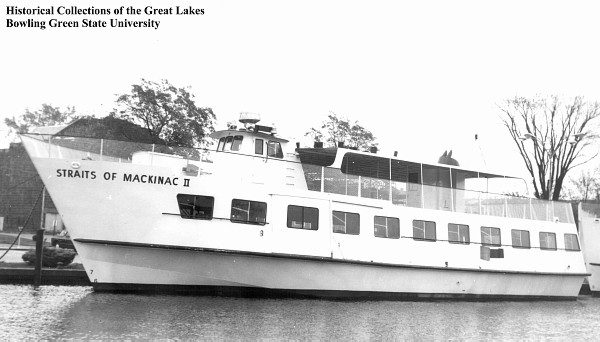