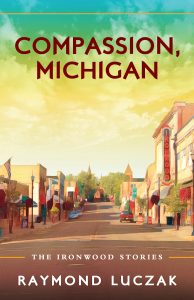 Raymond Luczak’s book “Compassion, Michigan: The Ironwood Stories” presented tales of courageous women who lived in Ironwood, Michigan, a small town located at the west end of the Upper Peninsula of Michigan (U.P.). Many young men, during the late 1800s to the mid-1900s, fled to this community to seek employment in the mines. The community had difficulty meeting the educational needs of all the children associated with the growing population. A multitude of miners sought women as their marriage partners. Not an ideal situation for the women. Luczak reiterated the dangers of mining in which Mary Doria Russell extolled in her book “The Women of the Copper Country.” Luczak covered approximately one hundred years of history concerning the town of Ironwood, a history filled with wars, mining accidents, major fires, and problems faced by women during various time periods such as the women’s suffrage movement.

One of the chapters “The Sacrament of Silence” portrayed a mother who struggled along with her son who told her about the pedophile actions of a priest. Luczak brought to light the problems it caused for her and her son. As defined by Leon Podles in his book “Sacrilege: Sexual Abuse in the Catholic Church,” many of the priests served in prominent roles and provided the communities in which they resided valuable services. The victims and their parents believed they would not be believed and shunned if they brought the pedophile actions to the forefront. Luczak did an excellent job when he revealed the situation in the chapter, the hurtful ramifications of the priest’s actions and the mother’s strength.

A situation in which a young woman was sent away to have a baby happened frequently during the 1950s. The woman felt abandoned by her lover and the loss of her child tore her apart for many years. She longed for her child. Another realistic situation described well by Luczak.

The “Yoopers” chapter revealed the importance of learning about the history of communities and about a food Yoopers referred to as pasties. A favorite well-known part of history associated with the U.P., a delicious food created a long time ago for miners. A Yooper was somebody who lived in the U.P. of Michigan while anyone living south of the Mackinac Bridge were referred to as trolls.

Some of the characters struggled with identifying with their sexual orientation and being accepted by the people in the community of Ironwood. One woman married a man she ended up despising and he brought great shame to her. Her life ended the way she wanted. Another woman married a gay man which worked out well until she met the man of her dreams. In the chapter “The Way of Men” Luczak portrayed a woman who wanted to be a man and the steps she took to accomplish that goal, very believable scenario in which the woman appeared to be a real woman.

Wars introduced a whole host of challenges. Miners fought to keep up with the demand for the ore they mined. Young women felt overwhelmed and obligated to send letters to lonely soldiers. They fell prey to the charms of soldiers on leave. As a result of the war effort, many women married men who mined the ore in Ironwood. Many of their husbands met an early death due to the dangers of mining and others felt neglected because husbands often spent more time with other miners than with their wives.

Luczak brought the history of Ironwood to life in his book “Compassion, Michigan: The Ironwood Stories.” His characters and the situations they experienced appeared realistic, and filled with loneliness, desperation, empowerment, misunderstanding, and driven by purpose. His stories, which were filled with grief and disappointment, were not depressing. Much could be learned from the characters’ struggles, their fortitude and their ingenuous ways of dealing with their problems. Luczak’s portrayal of the history of Ironwood made me want to explore and visit the town to experience its magic. I highly recommend this book. It was definitely a page-turner and a book filled with interesting and enticing memorabilia.