A Yooper Tale: Death by Wendigo by Robert Hugh Williams 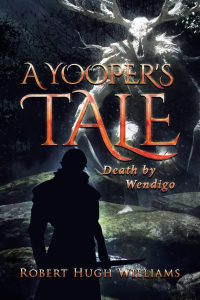 In A Yooper Tale: Death by Wendigo, author Robert Hugh Williams managed to enthrall the reader with the danger and mystery of an evil plot of a powerful family and how a monster lurked in the woods in the Upper Peninsula of Michigan. Native American folklore described the existence of the Wendigo and how it thrived on human flesh. Young women and men were preyed upon. Some lost their lives such as one of the main character’s cousin. A wilderness adventure group came close to the Wendigo and almost became the prey of the murderous beacons of darkness. The book provided a lot of episodes of stressful situations in which the reader wanted to find out what would happen next.

Williams gave detailed descriptions of weapons and ways in which the good guys took out the bad guys. The author described how two of the main characters used their military training to bomb, hide from and shoot the enemies. It was clever when a protest about environmental concerns was added to the plot to deter the criminals.

The book was gripping and definitely a page-turner towards the last half of the story. Realistic situations occurred in which a young woman fell for a man who played to her vulnerabilities and how people who cared about her felt about these circumstances. Williams provided the reader with convincing settings such as the caves, sides of hills, cabins and other conditions such as when prisoners were shackled. He placed the reader in these locations and what the people were experiencing. A Yooper Tale: Death by Wendigo by Robert Hugh Williams was entertaining and filled with suspense.