“Not Your Mary Sue” by Rebecca Frost 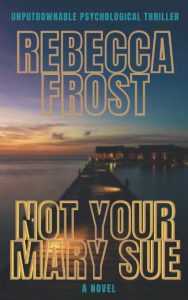 In Not Your Mary Sue, Rebecca Frost brought attention to the dynamics of a relationship in which a woman was held captive by a charming psychopath. She managed to create a variety of scenarios of suspense, tender moments, tension and a whole host of family situations. Jay, the serial killer, played on Mary Sue’s or Marcy’s vulnerabilities. She and others in the novel either refer to her as Mary Sue or Marcy throughout the novel. Her father arranged for her to spend time alone at an island resort during the summer months. He had unwittingly exposed her to a psychopath. A plot full of twists with stalkers and serial killers in a remote destination. Marcy must find her own true identity.

Enthralled by a charming psychopath, Marcy continued to have intrusive thoughts about her captor after their separation. A multitude of life changes does not change the past. Many come to her rescue when the serial killer escaped but she ended up alone with the madness. More bloodshed while her brother became a new suspect. Does Mary Sue survive the fallout?

The author kept the reader wanting to read more to find out what was going to happen to the main character, Mary Sue/Marcy. Frost’s expertise about serial killers and true crime stories shines through in this intriguing twist of surprises and suspense. Not Your Mary Sue is recommended for people who enjoy a compelling story.  Rebecca Frost has lived in the UP since moving there for graduate school in 2007 and has resided in L’Anse since 2016.