Home Biography / Men Shipwrecked and Rescued — Cars and Crew: The City of Bangor By Larry Jorgensen

Shipwrecked and Rescued — Cars and Crew: The City of Bangor By Larry Jorgensen 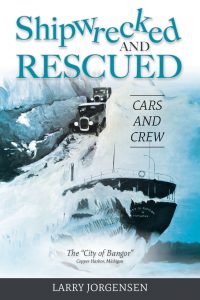 This short volume, Shipwreked and Rescued, is loaded with historic photographs, maps and charts, Larry Jorgenson presents the story of one of the more famous shipwrecks on Lake Superior, the City of Bangor and its cargo of Chrysler cars. The author begins with a brief discussion of the beginning of steamships on the Great Lakes, where they were built, etc. He also gives the background of the building of the ship in question and how it was converted from a “regular” freighter to one that could load and unload autos with ease. He also describes details of the autos (1926 Chryslers and Whippets) their loading and heading out for Duluth, Minnesota, where the vehicles would be distributed to various dealerships across the upper Midwest.

From that beginning, the author describes how the captain and crew of 29 were unconcerned about the late November trip, to their increasing concern and their efforts to remain afloat and survive a severe gale and cold temperatures that left 30 other ships frozen into clogging ice on the St. Mary’s River above the locks at Sault Ste. Marie. In what the ship’s captain described as “one of the worst” storms he had experienced on any of the Great Lakes, how the ship rolled from side to side, how the crew did not have sufficient warm clothing, how they had no wireless communication among many other scary details experienced by the captain and crew.

Had not the lifesaving crew from Eagle Harbor happened to see the crew struggling on shore while they were on their way to another rescue; had not the crew had the stamina to continue their 36-hour struggle from the place where they ran aground several miles east of Copper Harbor; had not the people of Copper Harbor, especially the Berg family (who had little enough food for the winter) shared their home and provisions with the starving, hyperthermic crew, the death rate could have been catastrophic.

Also in vivid detail, we read the story of how the cars were salvaged and removed from the ship due to the efforts of many people throughout the Keweenaw Peninsula to plow a road where there wasn’t one, to transport gasoline to the cars, drive them several at a time to Copper Harbor, open the road to Calumet working from both ends, drive the cars to Calumet to be loaded on a train back to Chrysler for repairs and restoration, all of which took several months. The fact that there were no deaths and almost all the vehicles were rescued, makes this particular shipwreck one of the most unique in the annals of Lake Superior.

The author also relates other car-transporting shipwrecks around the same time and what happened to the captain, crew, cars, and ship in the months and years that followed. It is also refreshing that a non-native of the UP took such an intense interest in this wreck that he made the time to research his topic thoroughly, work with the Keweenaw County Historical Society, search out the background details and utilize a great number of photos so readers can see as well as read the story. All in all, it’s a quick and informative read.