Cady and the Birchbark Box by Ann Dallman 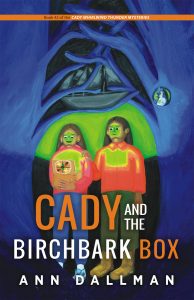 Ann Dallman crafted a novel titled “Cady and the Birchbark Box” which depicted the sophistication of the Native American culture and life of a determined teenager. Cady’s character struggled with a move to another community, a crush on a young man and a mystery behind a birchbark box. Cady demonstrated an endearing respect and admiration for her grandmother while frustrated with not getting the answers she needed. Who was Abe and what was his connection to Lake Superior’s shipwreck past? The Christmas Ship’s demise held her attention.

Realistic family relationships colored Cady’s world with a caring father, absent mother, new stepmother and baby brother. Cady managed to handle her responsibilities at home, as a soccer player and a high school student while she doggedly searched for the answers to a riddled past dug up from the ground of a vacant home. A noisy blue jay made its presence known while her crush was in and out of her life. She worked at calming her temper while she faced a life filled with stress. Often reminded about her gift of solving mysteries.