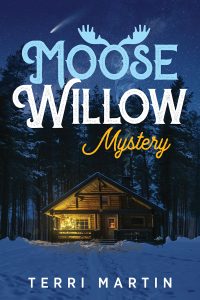 Moose Willow Mystery  begins with a suspicious death in a game-processing meat locker at the village of Moose Willow.  I questioned the place the mystery woman, who showed up one time at a choir practice, held in the book. Her role was explained but the explanation was hard to buy into. Janese’s mother forces her way into the lives of George and Janese challenging their privacy and sanity. Janese joins Bertie, a State Trooper, to help solve the disappearance of  George. Meanwhile, bigfoot sightings and elusive pregnancy tests muddy the waters at the Copper Country Community College. Terri Martin painted a picture of what winter is like for people who live in the Upper Peninsula of Michigan (U.P) with whiteouts and lots of snow, making driving conditions dangerous and causing power outages.

Martin describes life in a small town by using humor, and moody, compassionate and restless characters. Characters search for the answers to life while trying to maintain a semblance of normalcy. Small town events such as cantatas end up bringing in the new year with a bang. Some of the main characters face major life changes. A dog brings delight to Janese and others while helping to solve a mystery. Strange occurrences lead the sleuths down a path of discovery. Janese, forced to face her fears, manages to find true happiness.

I was really taken into the world of people who live in a small town in the U.P. As a U.P. resident myself it was very relatable. Everybody knew each other’s business to a large degree and had to struggle to make it through the winter months. I was led to believe other characters defined well in the book were the culprits. Surprised to find out who the real culprits were and why. I liked the characters, especially Janese. I was challenged when I really did not know the outcome of Janese’s possible big life change until much later in the book. Frustrated when Janese’s life kept getting in the way. If you are looking for a book that is hard to put down, “Moose Willow Mystery” is that kind of book. It’s entertaining, a fun read, and definitely a page-turner and reminded me of so many excellent murder mysteries I had the privilege to read.