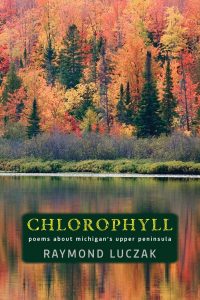 A poet as well-known as Raymond Luczak has been published in numerous books, anthologies, and literary journals. It would be hard to own all the various publications listed in the acknowledgment section of this volume, so Modern History Press made it easy working with Raymond to collect many previously published, and new, poems under one title: Chlorophyll.

Divided into four sections, each with its own “theme”, we have a glimpse inside the poet’s head of expressions of nature mixed with memories of the poet’s childhood and his view of life as an adult. The first read of any of the poems is like meeting a person for the first time, with a lovely first impression. Subsequent rereading lets us get to know each poem on a deeper level—personalities of new friends coming out to stay with us.

Part I centers on Michigan’s Upper Peninsula, its rocks, history, and immigrant population through rich visual images and myths. His use of first person to allow rocks like Basalt to speak works well: “We are the couch potatoes of rocks,” or for “Gichigami” who speaks of low temperatures preserving shipwrecks and bodies, to name only two.

The second part focuses on personification and metaphors for trees and seasons. Here we read a Red Maple wife who keeps marrying Spring, divorcing Summer, and remarrying Spring every year because she can’t do without “him”; or the “Squatters”, birds returning to the same nests each year, some of them being stuck with “fixer-uppers”; or the debutant tulips and daffodils attending the ball accompanied by prancing blades of grass; or hornets in “pin-striped suits”, along with dragonflies stitching up nightly quilts alongside beer-drinking mosquitos.

Part III expands into the personalities of house plants who speak of lost relationships, a compost pile burying teen-aged romances, or failed relationships expressed through wilting tulips and roses. In “Medusa’s Hair”, we read: “Her strands of thyme hurl toward the sun,” as a description of the tangled twists growing on a kitchen windowsill; and “The First Musk” gives us a memoir of playing marbles and growing up. The “glory days” and decline of the town of Ironwood are described in several poems, expressed through plants and nature taking over vacant lots.

Then Part IV focuses on trees—the “we” of surviving generations, cutting down the old so the new can “age” in the sun, the cycle of changes in life, a tree’s “value” in dollars or for themselves, along with memoirs of how trees affected the poet’s view of life. Here are a few favorite quotes from some of these:

From the prose poem on page 78:

“We were thinking of how we needed to be inside our house where our beds waited us upstairs. There we slept, never knowing that in the hurry of our growing up, we would ache to dream again of pines and owls and swings and stars so clear it’d make us cry, our middle-aged selves wondering whether we had been chasing the wrong mysteries the entire time.”

“Her language is so old
that pages of its dictionary/
have scattered among dreams.”

Or the seeds of maple trees (which this reviewer used to call helicopters) saying,

“Our names don’t matter
the veins of sugar
from our mapled mother
have pumped into each of us/
a pair of hard-shelled hearts . . . Disembarked with breezy kiss-offs
thousands of us nobodies/
will fight each season to take root . . .”

Each reader will find many favorites to savor over and over, new poem friends who speak to our hearts.