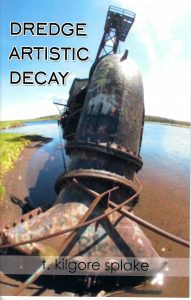 Dredge Artistic Decay, written by T. Kilgore Splake, offered the reader renditions of past losses. After the “Copper Boom” in the Upper Peninsula of Michigan (U.P.), businesses crumbled and along came the appearance of industrial relics. During the boom miners dredged millions of pounds of copper from Torch Lake. The 1950s were replaced by graying football spectators, wilderness poet’s ghost and a plastic Jesus dying on a cross. The poet’s immortality realized while reminiscing about his children, past wives and new poems. Poets suffer from writers’ block as they stare at the white abyss of a U.P. winter. Fantasized about a new romance and feigned loneliness. He located other desperate characters trying to find their way and a possible melding of souls. Splake weaved his personal story throughout his interpretation of artistic decay.