Home Children / Science & Nature The Big Island: A Story of Isle Royale by Julian May

The Big Island: A Story of Isle Royale by Julian May 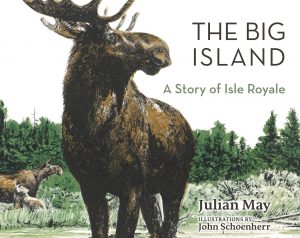 Julian May’s children’s book The Big Island: A Story of Isle Royale was originally published in 1968 but the timeless tale continues to educate and inspire young minds today. Isle Royale is considered one of the most remote National Parks and is located off the coast of Michigan’s Upper Peninsula, in the waters of Lake Superior. The book tells the story of Isle Royale’s most popular four legged creatures, the moose and the wolves. The Big Island is a classic read for any budding young nature enthusiast and explores the concept of a balanced ecosystem. With an effective blend of local history and a love of nature, Julian May writes about how the moose and wolves came to live on the island. She also tells about how people first came to the island and about the time period that Isle Royale became a National Park. The book delves into the park rangers’ various methods of intervention on behalf of the overcrowded and starving moose population. It also tells how the best solution was found when wolves arrived on the island naturally to establish a balanced environment. The Big Island provides readers of all ages some valuable insight on the predator-prey relationship of the moose and wolves of the island and their roles in the great circle of life.

Stunningly realistic illustrations of moose, wolves and other island wildlife cover the pages of this exceptional book. These illustrations were done by the talented, award winning artist, John Schoenherr whose numerous other works included Owl Moon, the original dust jacket of Dune and several of the Dragonriders of Pern stories.

While much time has passed since people first came to Isle Royale, the island (along with its furry inhabitants) remains a unique habitat for experts to study because of its remote location and separation from civilization. One such expert, L. David Mech, has studied the wolf population of Isle Royale. This 2021 reprint of The Big Island offers a notation in which David provides the readers an update on the lives of the beloved moose and wolf population since the book’s original publication over fifty years ago. Enthusiasts will be happy to learn how the island’s furry population is still thriving under the careful watch of park rangers and specialists such as L. David Mech.