The Secret of St. Christopher’s Girls School by David Crowley 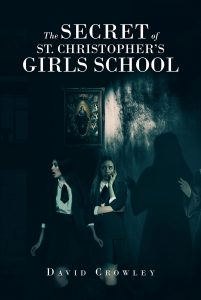 The story begins when Sister Margaret Mary is found murdered. Detective Steve McLean is called to the scene of the crime, and with the help of the Mother Superior, he soon begins making inquiries to determine who the murderer might be. When an assembly is held to inform the girls at the school of what has happened, only one girl, Marjorie, is brave enough to ask how the murder took place. When Marjorie is asked to stay behind after the assembly is dismissed, she assumes she is in trouble, but it turns out that Detective McLean is impressed that she was curious enough to ask, and he requests her help with the investigation by keeping her eyes and ears open and reporting back to him anything she learns. Of course, Marjorie is thrilled to help and flattered when the detective asks her to call him, “Steve,” even though when Marjorie begins referring to him as Steve, the other nuns think she is disrespectful. Truth be known, Marjorie develops a crush on Steve as the novel continues.

Unfortunately, Marjorie may not be the brightest girl. She soon blabs to two other people that she is helping Steve, but it results in people revealing to her what they know, so in the end it all works out. Marjorie soon discovers that several of the girls have secrets, and not surprisingly, that Sister Margaret Mary knew about at least one of these secrets and that her death may be connected to it.

I won’t give away the plot, but I will say there end up being many avenues for Marjorie and Steve to explore to get to the bottom of who murdered Sister Margaret Mary. Some of the secrets revealed end up being related to the crime while others aren’t, but none of these crimes put St. Christopher’s Girls School in a good light. Some of the secrets stretch back decades and, ultimately, one of these old secrets turns out to be the motivation for the crime.

But the killer is ahead of the detective team and desperate to fulfill their bent-upon revenge. Soon more bodies are added to the death toll and Marjorie and her friends find themselves in serious danger.

Although Amazon has listed this book in the young adult category, I would caution readers that it may be better suited for adults or older teens. Most of the secrets revealed are of a sexual nature, so they may not be appropriate for younger readers. However, the novel is written to some extent like a young adult novel since it has a teenage heroine, and because it is set in 1967, I could not help being reminded of old TV detective shows and Nancy Drew mysteries.

Some readers might take offense to the crimes occurring in a Catholic school, but it can’t be denied that convents have long been great settings for crime and horror fiction. Although Crowley does not develop any supernatural themes in the novel, he is writing in a Gothic tradition that dates back to the classic eighteenth-century novels of Ann Radcliffe and Matthew Lewis where monasteries and convents held horrible secrets. Consequently, the “discipline room” from earlier in the convent’s history plays a central role in the novel, although most of the nuns do not know of its existence. Gothic plots are usually family plots, so not surprisingly, in the end, it turns out the murderer has family connections to the school and convent and to deeds that were executed there in the past that eventually led to a life of horror for the murderer that inspires their revenge. Gothic novels also focus on redemption for the transgressive characters and the same is true here. Although the killer ends up non-repentant, the other characters are sympathetic toward the killer. As Detective McLean says at the end, “Bad people can cause good people to go bad.” The novel also raises subtle questions about religion and why God would allow such horrible crimes to occur.

I wrongly assumed the novel took place in the Upper Peninsula before I began reading it, but Crowley wisely never mentions the location of the fictional convent and school so as not to offend anyone. My only criticism is that I wish he had told us on page one how old the girls were. I started out envisioning Marjorie as eight and not until later was it clear these were teenage girls. I would have also liked more details about the school. It seemed like all the girls were the same age and in the same class, when I would think there would have been several grades.

Regardless, anyone who loves a good mystery will enjoy this novel. Anyone interested in Gothic fiction will appreciate how Crowley uses familiar Gothic settings to tell a story of murder and old secrets brought to light. The novel’s setting in 1967 also shows how times have changed and that keeping secrets for the sake of propriety rather than talking about issues openly usually only leads to hurting people.

While The Secret of St. Christopher’s Girls School is Crowley’s first novel, he has previously published children’s books and poetry and written several plays that have been performed. I hope more novels will flow from his pen.

— Tyler R. Tichelaar, award-winning author of The Gothic Wanderer: From Transgression to Redemption and Haunted Marquette