Debt and Disregard by Julie Genisot 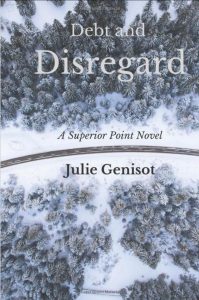 As the back cover states, Debt and Disregard: A Superior Point Novel is about “the hard-drinking, rough talking, and sexually pragmatic inhabitants of Michigan’s Upper Peninsula with characters defined by the region where they live.” While there certainly are people like those in the story across the UP, there are also such people in other small, one-industry towns across the country, and (speaking as a Yooper) not all people living there behave the way these characters do. If one were to put a movie ranking on the book, it would be R.

The plot revolves around several main characters. Lynn Pryce owns a tourist destination ski hill which is the town’s major employer. Nik Maki (wife Marci and two children) works for Lynn as his lift operator. Alek Maki (Nic’s sister) also works at the hill in housekeeping. Her abusive boyfriend is Jake. Lyn’s mother, Janice, shows up later—she left town after Lyn’s father’s death and basically dumped running the business on him. The author chose to use the omniscient point of view to be able to express the feelings of all these characters and others because each one has a secret and guilt on account of the secret. The various points of view weave in and out in each scene, which is sometimes confusing and calls for a careful read.

The plot revolves around Lyn Pryce’s decision whether, or not, to sell his ski hill to a mining company that wants to turn it into an open-pit iron mine. The townspeople see a coming mine as a boon to their economy, since many of them work subpar jobs. Lyn feels the pressure to sell, but “the hill” is all he’s ever known as home and it’s been his business (a very good one which leaves him way above the poverty of the town). He feels the mine will harm the local ecology and only be a short-term solution to the town’s problems. He’s tried to help the town with his money, but that is received with a certain level of resentment.

Lyn and Nik were friends in high school, but one of those secrets came between them, in addition to the fact that Lyn is now Nik’s boss—with that additional resentment. Alek wants nothing but to finish her online degree and get the heck out of town—something her abusive boyfriend wants to prevent. Nik and Alek’s parents just want the money from the sale of their land to the mining company, as do many other residents of Superior Point. The sale depends on Lyn’s choice; the ski hill is the bulk of the land the company wants, so without Lyn, there is nothing.

On page 66, in Alek’s point of view, we see the following about her relationship with her parents:

“To Alek, the strict borders of her parent’s life consumed every bit of their imagination, like lives spent in a vacuum. A place where all the answers we no and never yes. As a teenager, Alek was terrified it would happen to her if she weren’t careful. She was afraid of catching her parent’s dreary attitude of expecting little and being relieved when nothing happened.”

All the characters seem to be caught in this net of hopelessness and paycheck-to-paycheck existence, which is typical of many UP towns and often leads to alcoholism and abuse providing plenty of page-turning conflict between characters. Desperation leads some of the ski hill employees to sabotage the ski lift and other equipment in the hope that Lynn will give up and sell, excusing the breakdowns with the fact that equipment was old anyway. The actions of the characters and their guilt builds to a climax which can’t help but become a no-win tragedy.

After the ski lift is sabotaged, Lyn muses to himself about his father, Walter, on page 369:

“Walter had cut back the persistent growth of small shoots and weeds that threatened to choke the open runs. Removed rocks and replaced them with moguls. Vertical drops had materialized, crafted out of gentle slopes. Tree stumps ground down to make way for the foundations of bars and restaurants. Walter had changed the hill in unnatural ways. But Lyn never questioned it until he looked around the scattered remains of his father’s dream.”

People everywhere have flaws and strengths, and that is the universal theme which makes Debt and Disregard memorable.