Dissecting Anatomy of a Murder by Eugene R. Milhizer 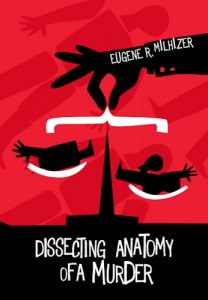 More than sixty years on, the book (and later the film) Anatomy of a Murder continues to fascinate people.  Why is that?  Well, first and foremost it introduced the genre of “realistic courtroom drama” to American readers and its impact cannot be underestimated.  You can draw a clear line from the 1957 novel to potboilers like John Grisham’s A Time to Kill (1989) and Scott Turow’s Presumed Innocent (1987).  The courtroom drama differs from typical Hitchcock-era fare in that the plot does turn on a “McGuffin”, like a coded message, to motivate the characters or silly tricks like surprise witnesses at the 11th hour.  Indeed, Milhizerquotes author John D. Voelker (aka Robert Traver):

I wanted to tackle a single courtroom trial because I had a small ax of my own to grind. For a long time, I had seen too many movies and read too many books and plays about trials that were almost comically phony and overdone, mostly in their extravagant efforts to overdramatize an already inherently dramatic human situation.

The impact of Anatomy of a Murder also involved several firsts with respect to the Upper Peninsula.  Specifically, Eugene Milhizer’s book Dissecting Anatomy of a Murder claims it was the first Hollywood film shot entirely on location.  Normally, exteriors would be shot by a “second unit” and performances on a soundstage.  The magic of editing would fool the viewer into thinking the action was taking place in Rome or New York City or wherever.  The prime location happened to be the Marquette courthouse and numerous other locations around the county including as Ishpeming, Big Bay, and Michigamme.  You can still see the famous “autograph wall” of the cast and crew in the basement of what is now Globe Printing in Marquette. The film adaptation which was Jimmy Stewart’s fifth and final Oscar nomination in 1960, so you could say it was the capstone of his career.  Standout performances by rising stars Lee Remick, George C. Scott, and Eve Arden made it a tour de force. A running time of 160 minutes made it the longest Hollywood blockbuster up until that time except for Ben Hur.

The all-encompassing structure of Milhizer’s Dissecting Anatomy of a Murder makes it unique and a must-read for the Anatomy completist. Specifically, the book divides into three sections:  the early life and career of lawyer John D. Voelker (pen name Robert Traver), a detailed comparison of the real-life case, the real-life story of how Lt. Coleman A. Peterson shot and killed tavern owner Maurice Chenoweth point-blank in Big Bay vs. the screenplay depictions of case materials, and lastly an intense legal analysis of the pivotal issues including the insanity defense, jury nullification, and the underutilization of voir dire (eliminating unqualified jurors).

Sprinkled throughout the copiously footnoted book are wonderful reminisces from John Voelker about his career both as a struggling lawyer and then as 16 years as prosecuting attorney for Marquette County.  Voelker’s love for the rugged beauty and wilderness of the U.P. comes through his disdain for how the newly constructed Big Mac bridge would open up the U.P. to just about anybody and how carefully he hid his favorite trout fishing hole.  Some of these reflections come to us through excerpts of his three prior unsuccessful novels and his extensive personal diaries which give us a rare look at the man behind the mirror. In one of life’s cruel ironies, Voelker was finally selected as a Michigan Supreme Court justice just weeks after Anatomy of a Murder became a New York Times Bestseller. This would have also solved his financial woes but at the cost of forsaking his beloved U.P.

As a lifelong film buff, I enjoyed the behind-the-scenes look at film production a bit more than learning about the subtle and not-so-subtle differences between the brazen murder of Peterson vs. the on-screen depiction of Manion as the perpetrator.  Otto Preminger, the film’s director and producer, comes through as a larger-than-life character who stops at nothing to insure a smooth movie-making process.  In one example, he pays off a lawsuit brought by the family of the real-life perpetrators for the too close to real-life depiction seeking compensation for both royalties and violation of privacy.  If Anatomy of a Murder is on your Netflix playlist, then Milhizer’s Dissecting Anatomy of a Murder should be on your bedside table!