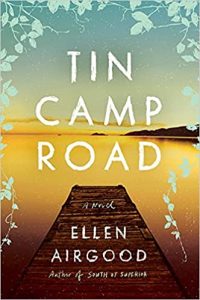 The wait is over. Fans of Ellen Airgood’s South of Superior have waited a decade for her new novel Tin Camp Road. In the interim, Airgood published two young adult novels, Prairie Evers and its sequel The Education of Ivy Blake, but this is her first adult novel in a decade, and it has been well worth the wait.

Airgood, who owns a diner in Grand Marais, Michigan, might be called the UP’s version of bestselling novelist Anne Tyler because she writes about real people, living real and often messy lives, in realistic places. In this case, her main character, Laurel Hill, lives in the small tourist town of Gallion on Lake Superior’s shore, where she makes a living cleaning motel rooms, working for the people who now own her own family’s home, and generally struggling to make a living as a single mother. Her daughter, Skye, is ten years old and a creative, intelligent spirit who is the center of Laurel’s life.

Skye makes friends easily, including adults who want to help Laurel to give her a better life. However, their offers to help often place Laurel in a difficult position where she is torn between wanting what is best for her daughter and not surrendering her daughter to others’ care. She feels bad that she cannot send her daughter to summer camps or buy her the things she would like to. It is all Laurel can do to keep a roof over their head, and for a time, she even finds herself homeless. Add to that Skye’s dog and guinea pig to care for and Laurel has her hands full.

Several colorful and kind characters fill the pages, including an old man Laurel chops wood for to make some extra money, a divorced woman who runs a grocery store where Laurel helps out, and the people who own her family home that they have turned into a B&B and who almost seem to want to adopt Skye. And then there is Jen, Laurel’s best friend since the third grade who finds herself in bad relationships with men and keeps expecting Laurel to rescue her when Laurel already has enough to deal with. 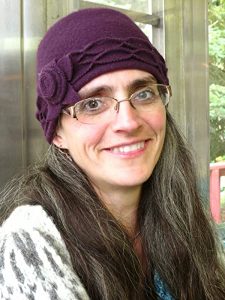 Airgood’s style is one that penetrates to the hearts of her characters, showing us their strengths and weaknesses and especially the strengths they have that they do not always recognize. We feel the struggle that Laurel faces, while at the same time understanding why she chooses to stay in her hometown, even if work is often hard to come by or not well paying, even if she has a car that constantly stalls, and she has to shovel snow and live in a trailer out in the woods to get by. Laurel draws on fond memories of a perfect childhood and her grandmother to give her the strength to keep going, plus she is determined that she and Skye will stay together, no matter what anyone says.

Nor is Tin Camp Road a story all about sadness and difficulties. Skye and Laurel have a special relationship that is really filled with some wonderful moments of love, trust, and just having fun. While other adults don’t always understand their situation, mother and daughter know they belong together and their bond of love is unbreakable.

The Upper Peninsula is depicted accurately in the novel. Airgood obviously knows and loves the area, not painting it at all as idyllic, yet reflecting its beauty, its power, its economic struggles, and the dangers that can exist from living along Lake Superior. 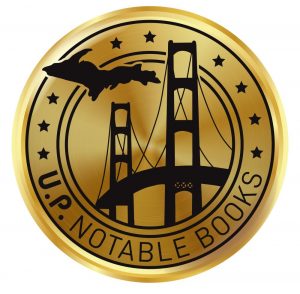 I kept hoping for a happy ending because I cared about the characters, but I also knew there would be no deus ex machina stepping in to save the day for Laurel, nothing that would be unlikely. I did not foresee how the book did end, yet Airgood planted the seed for the ending early in the novel like a good novelist should, and when the end did arrive, I couldn’t help feeling it was perfect. It did not neatly wrap up the story but rather opened it up for the next adventure in the characters’ lives.

Airgood sums up the novel’s message a page or so from the end when she writes:

“Happiness was a net—that was it. You had to build a life that happiness would snag in. When it did, you took it up and used it. Ate it, salted it, relished it. Then you put the net down again. Nothing guaranteed you’d haul it up full every time. You wouldn’t. But sometimes happiness would catch, and you’d have what you needed, at least for a while. Long enough to tide you over until the next time.”

If you have not read an Airgood novel before, Tin Camp Road is a great one to start with. These are real characters you come to care about, and it reads so quickly that you will regret parting with them so soon. Hopefully, we won’t have to wait another ten years for the next one.