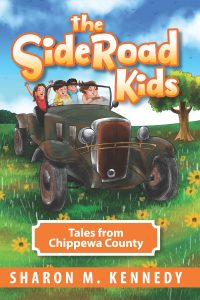 There are many books that detail the history of the Upper Peninsula of Michigan.  These are often rigorously researched and documented (some may be less so) and they represent an important aspect of the way we understand this strange little corner of the world.

The SideRoad Kids: Tales from Chippewa County is not that kind of book.  It is a fictional retelling of the life of Sharon M. Kennedy, the stories of the time she spent growing up on the east end of the U.P., and the myriad characters that she grew up with.

Each chapter is a story about Yooper life, a mixture of back-country living and 1950’s nostalgia that is reminiscent of Jean Shepherd’s A Christmas Story.  And Kennedy does indeed include a Christmas story in her book, one that takes the kids on a trip that is a little more like Gift of the Magi than they bargain for.

The kids in the book, with names like Flint, Candy, and Squeaky, could easily be any of the kids we all grew up with, familiar in their idiosyncrasies, lovable in their innocence.  Most of the chapters are centered around the months of the year, the school year in particular focuses on notable dates as prescribed by the children’s teacher, Valentine’s Day, President’s Day, and the like.

The way in which children experience the world is something we often forget as we get older.  Kennedy convincingly recreates that and makes the reader remember how it was to be a kid again.  Do you remember how easy it was to make friends?  How quickly you forgot or overlooked differences that might be overwhelming for adults?  Also how fast you got over slights and arguments as a child?

Just like real life, it’s not all wild capering and fun times.  Kennedy tells stories of death, of loss and heartache, and of the dark thoughts that can pervade a child’s mind, and she tells it with that same realism that reminds you about the real-life events and how kids try to deal with those stresses.

The setting, not just the Upper Peninsula but the specific towns and areas around it, lends a dash of realism to a native Yooper story that is sometimes lacking in other fiction about the area.  Kennedy is writing about her hometown and the places she knew as a child.  Because of that, it makes everything seem more real to the reader.

SideRoad Kids: Tales from Chippewa County is a great little slice of the Upper Peninsula.  Even though it’s set in the 50’s I can see similarities to the people that I grew up around in the 80’s, so I expect that those would be familiar to anyone from the area.  This book is great for readers of all ages, a short story collection that is part non-fiction, part fiction, and all enjoyable.