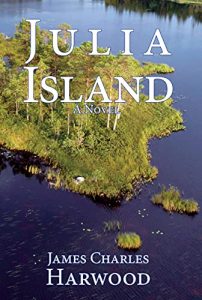 James Charles Harwood’s new novel Julia Island is a rollickingly funny novel with some serious undertones that takes the myth of Hiawatha, along with Native American stereotypes, quantum physics, and recent American history, and mixes them all together to create an epic tale worthy of both Longfellow and Kurt Vonnegut.

Harwood thinly disguises many places in Upper Michigan and other locations in the novel, ranging from New York to California and Afghanistan. Readers will enjoy identifying these locations, all treated fictionally. There are even some thinly disguised celebrities who make cameo appearances.

At the heart of the novel is The Chippewa Club, just north of the town of Joliette, in the Upper Peninsula. Here in the mid-twentieth century, a young female club member fell in love with a mysterious Ojibwa man who was never seen again. The fruit of this union was young Hiawatha, who grows up at the club, an idyllic wilderness setting where he is able to display the skills and know-how of his Ojibwa ancestors, become a hero to the young white club members, and eventually win the love of a young maiden from Chicago, daughter of wealthy environmentalists. The result is an epic wooing and a colorful wedding that skillfully play off of Longfellow’s original. Here is just a brief passage about the beginning of Hiawatha’s relationship with Kelley Green to give you a sense of Harwood’s style:

“Later in life, the sonnets were to be reserved for Kelley Green, who shared the same hippy heritage and Club privilege. Kelley was a summer resident, brought by her parents for long vacations from Chicago. A child of dilettante artisans, she hadn’t blushed when Hiawatha smiled in amusement at her ironic name. Her response was ‘Oh, I’m the lucky one. They named my sister Keep America.’

“And so their relationship, founded on common ground and nourished by humor, matured into an abiding mutual regard. Kelley was thoughtful, dainty, creative, and perceptive, and nearly as tuned in to her surroundings as Hiawatha was.

“Kelley worshiped Hiawatha at a distance for years before he seemed to take notice. He had noticed all along, of course, his inscrutable Chippewa demeanor belying his interest. So, their relationship enjoyed the bedrock of knowing and loving each other long before the spasm of puberty accelerated their attraction. Each September, Kelley returned to Chicago and school. Hiawatha, owing to the influence and power of Great Daddy, was spared public school education. He might have been the first totally homeschooled child in the Upper Peninsula of Michigan, certainly the only transcendentally educated one.”

In the first half of the novel, the poetic prose invites readers to suspend their disbelief. Near super-human characters, fantastic deeds, and loads of Great Lakes lore all come together to poke fun at stereotypes, celebrate the Upper Peninsula, and expand Upper Michigan literature to new dimensions.

However, the idyll ends for Hiawatha and friends when a tragic fire causes them to flee to safety at the remote Julia Island, a mysterious place that will eventually draw them back again and again with astonishing results. But first, after the fire’s devastation, Hiawatha and his family accept an invitation from two of the wealthy club members to visit them in New York. I won’t get into all of their adventures in the Big Apple, but I can’t resist saying that probably my favorite part of the entire book was when Hiawatha became involved with a Broadway musical version of The Last of the Mohicans—that gives you some idea of how far-fetched, and yet not, the story can get at times as it plays with stereotypes, whether of Native Americans, the theatre, the Upper Peninsula, or any other area of interest that enters its pages.

The second half of the novel shifts to a bit more serious tone, but the magic never fades and the ending is both unexpected and yet somehow perfect for such a potpourri of a book.

I would love to say far more about Julia Island, but I think people just need to experience its mesmerizing magic for themselves. I will say that among novels set in Upper Michigan, nothing else quite approaches the effortless mythmaking, playfulness, and sense of place that Harwood blends together in these pages. Frankly, I am a bit jealous that I did not write it myself.

— Tyler R. Tichelaar, PhD and award-winning author of Kawbawgam: The Chief, The Legend, The Man and The Marquette Trilogy