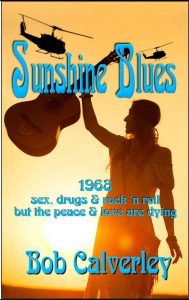 As it turns out, this is about the best description of Bob Calverley’s Sunshine Blues that I could come up with, and it was written by Calverley himself.

The second in a series, Sunshine Blues follows the travails of Gloria and Jimmy, star-crossed lovers who, as it seems, have a lot of trouble catching a break.

I didn’t read the first in the series, but Calverley drops enough hints throughout the telling of the tale that you don’t have to. In the first book, Gloria, hereafter referred to as Sunshine, and Jimmy had run-ins with mobsters and a wicked step-father and wrote and sold a hit song with their friend. This book takes place shortly afterward when the two, still mourning the loss of their third bandmate, are separated by Vietnam.

Sunshine is going it alone at home, single and pregnant in the middle of a Detroit winter. She’s being pursued by a cohort of her deceased stepfather, a Taiwanese gangster, who has no good planned for her. She’s living with the mother of their deceased friend and trying to make a go of it as a songwriter during the turbulent sixties, when political and racial tensions are running high across the country.

Jimmy is in-country, working on a helicopter crew called “The Headhunters” and flying gunship missions for the United States Army. As if being in the midst of a war zone as complicated as that of Vietnam during the conflict isn’t enough, someone is murdering members of Jimmy’s company, and the high brass wants it covered up.

Calverley has written this book in two parts, so that the events Sunshine and Jimmy are living their own separate lives. He uses references to landscapes and places so that he is able to keep the feel of the book very Michigan-centric on the Sunshine parts. Dropping names like Bob Dylan and mentioned large social events, assassinations of JFK and Martin Luther King, for example, increase that 60’s feel that Calverely is looking for, but the places where the book shines the most are in the portions set in Vietnam.

Jimmy’s path through the war brings him in contact with many different kinds of characters, from stoned buddies to uptight colonels, and all written in a convincing patois that tells of Calverley’s first-hand experience overseas. His knowledge shines through with the military lingo, and further draws you into the complicated murder-mystery that is unfolding in the midst of the war zone.

“Charlie model gunships are harder to fly than slicks. Most of our slicks are fourteen hundred horsepower but the gunships are only eleven hundred…I flew with Moss when he was a slick pilot. He’s okay. Now he’s a CW2.” (pg. 37)

Stuff like this really makes me get a feel for the era, as well as how entrenched you can become in the way you talk to people when you’re all experiencing the same awful things.

If you’re looking for a fast-paced, multi-faceted story, then Sunshine Blues might be right up your alley. There’s a lot to unpack here, and Bob Calverely helps to roll the 60’s into one neat package, even though a few bodies may wash up along the way.

Brad Gischia is a writer and illustrator living in the Upper Peninsula of Michigan.  He’s published comic work with Source Point Press and DimThroat Comics, and has recently published two children’s books, Professor Cryptid’s Encyclopedia of Legendary Creatures and King Muscle and Spider Monkey due out this fall.  You can find more of his work through his social media accounts, IG and Twitter @comicwasteland.