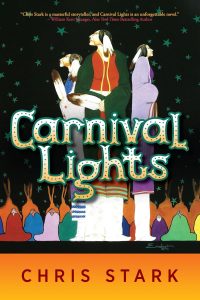 Chris Stark’s new novel Carnival Lights offers up a wild ride like no other in the history of Native American literature. Set in 1969, it plays fast and loose with time, continually juxtaposing the present with the past, fulfilling William Faulkner’s statement that “The past is never dead; it’s not even past.” The two main characters, teenage cousins Sher and Kris, exist in a world where everything is a reminder of the tragedies, but also of the family, love, and cultural teachings of their Ojibwa heritage in their native Minnesota. As they try to flee the past and create a new future for themselves without any preparation for the real world, they find threats surround them on every side. Even the dazzling carnival lights of the Minnesota State Fair hold little promise, though they are attracted to them like moths to a flame.

While Sher and Kris’ story is a fairly straightforward narrative about leaving home, because Kris is abused by her father, and striving to make a living working at the fair, while trying to avoid the many dangers that surround them, primarily from white men, layer upon layer of history, meaning, and pain is added to their story. Throughout the novel, we meet many of the girls’ relatives, some alive, some long dead, and learn their stories—stories adequately described in Sher’s memory, yet mixed up with popular culture images of Native Americans:

“She’d hear the stories about her family. Her people. Dying from disease and starvation in the 1800s until only a handful survived deep in the bush, and the other handful disappeared into the TV sets and boxed foods in the surrounding towns, mixing with whites until the only way you knew they were Indian was through the facial features that looked white at first glance, but upon closer inspection the eyes, cheeks, and foreheads seemed stretched and angled in ways that made them look as if they were in a state of discomfort from never belonging anywhere.”

And within the stories of Sher’s people, within the stories of Carnival Lights, is told the entire story of Minnesota and the history of white Americans’ relations with Native Americans, and a distorted sense of history, and a fresh Native American perspective no white person might ever consider. Author Chris Stark drops bombs of Native perspective in subtle ways throughout the novel. Set in the summer of 1969, the moon landing offers a perfect opportunity to drop such a bomb when Sher and Kris’ grandmother expresses her disbelief in the moon landing: “Yah, sure. They’re on the moon now planting their flag. White people say anything and take everything.” Other bombs are historical facts the reader may not be aware of, including Indian babies being sold to white couples on the Great Lakes, babies who will grow up never to know for years they are Indians. And L. Frank Baum, author of The Wonderful Wizard of Oz, advocating in newspapers read in Minnesota for the final destruction of the Native Americans.

And then there are the literal bombs, or at least rockets. Stark layers in all kinds of little known details about American history, waking it from its sleep to discover the ugliness beneath much of it. Among those ugly truths are rockets displayed at the Minnesota State Fair, rockets worked on by Nazi scientists the United States saved to do their own bidding. Nazi scientists who help to bring about the US’ conquering of the moon.

And while 1969 may seem like history to readers, Stark’s depiction of Vietnam War protests in Minneapolis, including police attacking protesters, sends shockwaves to the present with reminders of the recent riots in Minneapolis in the wake of George Floyd’s death. What kind of carnival is this that Stark offers her readers? It is more funhouse than fun, with distorted history to view at every turn, at every time we look into the mirror of the past, we have only Stark to help us refocus on the truth reflected in that image.

White America’s white façade is continually seen to be dirty or soiled, to be a false façade, as we see Native Americans, blacks, Jews, Germans trying to escape the horrors of World War II, and gays and Two Spirit people all passing through the novel’s pages, each trying to find their place in a melting pot that cannot assimilate them because it refuses to accept what it sees as their imperfections.

Examples of failed assimilation are sprinkled throughout the novel. In one passage, we are told that during the worst winters Sher’s family would give away their last reserves to other families, both Indian and white:

“That very thing—generosity—that the government had hoped to cure by stealing Indian lives, ways, and land and then giving the surviving Indians tar paper shacks, farms, and the white man’s religion. How many memos they generated—The Indian in his simplicity will give away the last of his clothing, food, and feathered trinkets that seem to have great value to him with no thought to how he will survive himself. This can be cured by teaching him ownership so that the Indian too can become civilized in the ways of the white man.”

In their journey, Sher and Kris meet Jacob, a young gay Jewish boy who dreams of being Ginger Rogers, who dreams of finding his own Fred Astaire to sing to him, dance with him, and spin him in “A place where boys loved boys, a place where he was not the only one.” Yet Jacob has to assimilate and try to survive also.

At one point, Sher comes to the conclusion: “It felt like every time she turned around, there was another white man trying to hurt them.” And when characters in the novel are hurt, a new wound opens up old wounds, which reflect generations of pain. When one character hears shocking news, we are told, “Em’s pain flared and burned deep, catching the pain of murdered and missing ancestors she’d never known, creating a fire as large as a forest in the young Indian woman’s blood.”

Carnival Lights is a powerful, lyrical, epic witness to the history of the Ojibwe in Minnesota and to all Native Americans. It is the northern equivalent of Toni Morrison’s Beloved. It is a nightmare stealthily hiding behind the glow of the midway. It is an awakening for anyone who dares to pull back the veil on the past to find the truth that festers beneath. For only when that truth is known can the healing begin. It is too late for Chris Stark’s characters to come into the light, but through the illumination the novel offers, it may not be too late for the rest of us.

— Tyler R. Tichelaar, PhD and award-winning author of Kawbawgam: The Chief, The Legend, The Man