Seasons of the Birch By Susan M. Puska 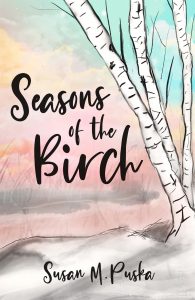 Seasons of the Birch, a work of historical fiction begins in 1944 and ends in the present, although the emphasis is on the years 1944-1959. The main character, Ruth Amundson, is a petite, easily blown away, shorter than average young woman who has been working as a nurse at Henry Ford Hospital in Detroit. She returns home to the Big Bay area of the Upper Peninsula for a visit before joining the army. In the opening chapters, we meet her older sister, Linda, a childhood friend, Joe, and learn about her troubled growing-up years and factors that built her strong and resilient personality.

Readers follow Ruth on her long, zig-zag (to avoid submarines) journey across the Pacific to Manila, Philippines. We feel the blackout nights, the seasickness, and the constant anxiety. We meet her fellow nurses and learn their backgrounds. Others tell Ruth about how beautiful Manila is and then, see its horrific devastation. We learn a lot about how difficult nursing was in those circumstances and how doctors treated the nurses. Ruth finds out why she is lucky not to have “the curse of beauty” that her fellow nurse, Alice, has. These are issues often left out of other literature in that era.

The author’s descriptions of war, the casualties, and burn victims are described in a way that, while not horribly graphic, make readers understand the truth of Ruth’s supervisor’s statement, “War can make anyone commit evil.” Crooked supply sergeants, black market selling of supplies, morphine-addicted doctors sexually assaulting nurses.

Readers know from the early chapters that Ruth never had a “Norman Rockwell” Christmas and understand why she shut off the radio playing Bing Crosby’s “White Christmas” while others clung to such images in places like Manila or the front-line hospitals in the jungles of Batangas. We also understand Ruth’s challenge in caring for a Japanese prisoner with the same amount of compassion as an American soldier. Then we endure Ruth’s long wait to return to the United States when the war ends—last in last out.

Another topic not often approached in World War II novels is the difficulty of a return to civilian life. Ruth struggles with what to do with her life—return to her beloved Upper Peninsula, keep working in Detroit, marry and have a family? After, for the most part, being highly respected for her nursing abilities and appreciated by soldiers, she is now put down, devalued and ridiculed by many who never served and who want to get back to the “old” ideal of normal, of women in the kitchen and only having babies, not careers. Only other veterans really understand what all of them went through. A quote in Chapter 8 said it well: “Most people were like that. They would rather fantasize about war than ask or listen.” Ruth is furious with a bank manager who refuses her a GI mortgage loan, telling her to come back when she has a husband, while a male veteran would be automatically accepted for a loan.

While Ruth does marry (a fellow vet) and have children, her husband struggles with what we now call PTSD. She must make yet another choice—stay with him or not. A friend tells her, “Who knows. John may quit drinking for good someday. You know that war tormented him. It doesn’t make him a bad man or even a weak man. But he is an injured man. And he’s not alone. We know many from that war who drink too much. Women, too. You’re one of the lucky ones.” The epilogue wraps up all the loose ends and this reviewer will not be a “spoiler”.

If I were to criticize anything about this novel, it would be the pacing and, at times, emphasis on narration over scenes with dialogue. But with the number of years covered, I’m not sure how the author could have done otherwise and accomplished the same purpose of showing how lives can be as resilient as a birch tree straightening up after a winter buried in snow. Seasons of the Birch gets a big thumbs-up!