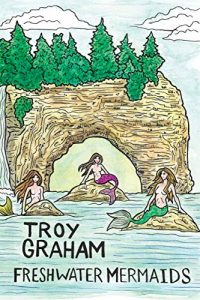 There are as many styles of poetry as there are poets. For readers, it is sometimes like choosing a flavor of tea: some readers like Earl Gray, others English Breakfast Tea, still others like any of a number of herbal teas. Troy Graham’s poetry in Freshwater Mermaids is, in itself, a mixed bag of flavors. The poet explains his collection in an introduction, telling of his battles with depression over the course his life.

Great lines like: “As I watch the sun rise over what’s left of the moon . . .” may be followed by clichés: “I’ll be quiet as a mouse.” Often repeated themes include pain and grief, betrayal in love, anger at unpleasant childhood experiences, and the fact that life often does not turn out as one had hoped. One of the more interesting observations can be found in the poem “Outhouse”:

Many of the poems seem to reflect the ramblings of depression, descriptions of lost loves, disconnected thoughts and mixed metaphors, which may all demonstrate the thoughts and confusion people experience during bouts of low emotion. One might wonder about the frequent use of “crude” language, but this may well be another aspect of a person whose life is in disrepair or dysfunction. People “hitting bottom” during drug or alcohol addiction, or in recovery, would probably find they have a lot in common with the poet. Other readers would have a good look at what life is like under those circumstances. An example is the poem, “Silence”:

“Do you hear the silence
Can you see the darkness
Can you feel the emptiness
That dwells inside you
If so you are a lot like me”
Or this set of lines: “So little love and so much pain
There are not enough umbrellas
For all the world’s rain.”

The organization of the poems in the book also shows the theme of disconnected thoughts. The poems “Hate” and “Hate II” are separated by several pages. Every now and then, a brighter poem with some hope pops in, along with a really good line or two:

“Suicide is Death’s playmate
Like the wind is the earth’s.”

But then the poet seems to go back into rambling mode. Perhaps this technique is another symptom of the poet’s depression, but it may leave other readers longing for something a bit more upbeat. Could that be the whole point?

One also finds some rather unusual descriptions: “Her eyes remind me of a piece of gum on the bottom of someone’s shoe.” But the poem “Time” has quite good personification. The final poem, “The Tire Swing,” offers the best explanation for all of the low points. Hopefully, the poet found writing this collection therapeutic, as writing often can be.

It is also evident that the peer editor did not do the best job for the poet since errors with their/there and other such simple things tend to get in the way of one’s reading. It’s hard to excuse these elementary school level grammar errors as poetic license.

While this collection is not this reviewer’s “cup of tea,” it might well be a favorite for other readers.