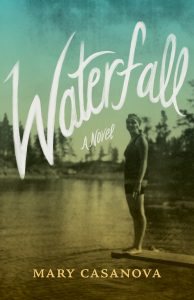 If you like a fast-paced historical novel rife with issues that resonate today, you’ll enjoy Waterfall.

Set in the 1920s with a myriad of conflicts woven into the story, I often thought how contemporary the mindset was of the main character, Trinity Baird. The youngest of three sisters and the apple of her father’s eye, she struggles at age twenty-one to adjust to life outside Oak Hills Asylum where she has unwillingly spent the past two years.

Released to return to her family, she joins them on their island in north-central Minnesota near the Canadian border where they have summered for the past several years. The family compound on the island was built with wealth from a corporation owned by Trinity’s father in the family’s hometown of Davenport, Iowa. The island hosts the main house and several smaller structures—guest houses, a boathouse, and Trinity’s log cabin art studio. Nearby islands are populated by other wealthy families who have become friends and social acquaintances over the years.

Upon release from Oak Hills Asylum, Trinity constantly fears saying or doing something that could get her recommitted.

She trembled at returning to the island she loved and the family who had sent her away. How could she ever forgive them for thinking they knew what was best for her? She would watch her every step until August, when she would leave for Paris.

But three months with Mother, a hovering presence watching her every word and gesture with the scrutiny of a raptor . . . the very thought made her want to dash for cover.

RuthAnne, Trinity’s oldest sister, soon arrives on the island with a boatload of her own troubles. An incessant alcoholic, she has little regard for Trinity and never masks her feelings. After an exchange between Trinity and her mother about RuthAnne’s inebriated state prior to arrival at a party on a nearby island, Trinity reflects on her mother’s defense of RuthAnne.

Always the same utter denial of what was reality and a complete defense of Trinity’s oldest sister. Why did she even try? She could see she wasn’t going to get anywhere.

Trinity has plenty of platonic interaction with male characters, but one in particular, Victor Guttenberg, seems to move past the platonic with his recitation of poetry.

His words sent shivers dashing across her skin as she clapped with the others. What did this poem mean? “Blonde hair” could be hers, or his more sun-bleached version. Did he see her as if behind a veil? Was it her time away, or did he mean her unraveling before she was sent away? The veil so governs me / that to my death . . . / the sweet light of your lovely eyes is shadowed.

Or was it a simple love poem that had nothing to do with her? 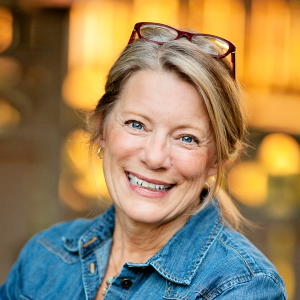 Casanova excels in all the elements central to fiction writing. As for characters, her main character is complex, emotionally mature beyond her years, and sympathetic. The anti-heroes are well-drawn and conceal their weaknesses until the opportune moment for heightening tension. The setting is skillfully described in a straightforward way. The plot, while chockablock with numerous conflicts, resolves beautifully, providing a maximum of reader satisfaction.

Casanova is, in my opinion, a plot master with few equals. I have not read any author recently who could incorporate as many issues into a story and do it successfully. Waterfall includes racism, religious bias, mental health taboos, the power of the wealthy, environmental issues, the rebelliousness of the younger generation, homosexuality, promiscuity, sibling rivalry, parental rejection, humane treatment of domestic and wild animals, artistic rejection, and adult failure to keep a potentially life-changing promise. This writer handles them all and leaves you wondering how she managed to do it.

For historical fiction readers, Waterfall provides a pleasant diversion to the 1920s that will keep you glued.