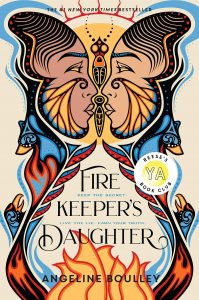 Angeline Boulley’s debut novel Firekeeper’s Daughter tells the first-person story of Daunis Fontaine, an eighteen-year-old from Sault Sainte Marie, who is part Anishinaabe (Ojibwa) and part-Caucasian. Her mother, daughter to one of the wealthiest families in the community, got herself pregnant by Daunis’ father, a Native American hockey player. Unfortunately, by the time Daunis’ mother told her father she was pregnant, he had already hooked up with another woman. Consequently, Daunis has a half-brother, Levi, who is close to the same age.

Daunis grew up with her mother. Her maternal grandparents refused to list Daunis’ father’s name on the birth certificate. Daunis, however, has managed to remain close to her Native American relatives and their community on nearby Sugar Island, even though the tribe does not recognize her because her Native blood is not documented.

Add to this background the distribution of meth in the Sault and Daunis finds herself caught up in a situation that will test her loyalties to her community and her family. She soon learns that a new boy in town, Jamie, who is on her brother’s hockey team, is not all he appears to be, and neither is his uncle Ron, who has taken over the teaching position at the high school that Daunis’ Uncle David had held until his recent untimely death.

Death seems to be everywhere for Daunis. Both her father and her uncle have died, and her grandmother has just gone to a nursing home. As the novel progresses, more tragedies will mark her young life. Daunis has had a lot thrown at her for her young age, including the secret of her birth. Toward the end of the novel she states: “The weight of my secrets is exhausting. My whole life has been filled with them. Even as a zygote, I floated in an embryonic sac of secrecy” (394).

What makes Daunis’ life even more difficult is that everyone around her also appears to have secrets, beginning with Jamie, whom she begins to have romantic feelings for, only to learn he’s not eighteen but twenty-two and working for the FBI, as is his uncle. They are investigating the meth dealers in the Sault who appear to be part of the Native American community. Before she knows it, Daunis finds herself caught up in the investigation, agreeing to pose as Jamie’s girlfriend and to keep her eyes open for hints of who might be involved in the drug dealing.

Further description of the plot would spoil the surprises Boulley has in store for the reader. Daunis experiences one shock after another, gradually becoming wiser about the secrets in her community. But being wiser also makes her sadder, as she states: “Wisdom is not bestowed. In its raw state, it is the heartbreak of knowing things you wish you didn’t” (393). 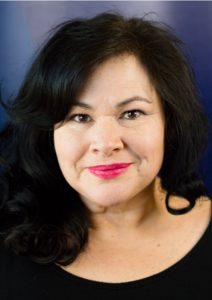 Boulley’s novel has already received a lot of attention because it is going to be made into an upcoming Netflix series. The critics have also raved about it. While I enjoyed it, I personally felt in many ways it was a typical crime thriller, and at 494 pages, a bit too long. While I was interested for the first hundred pages, the pacing kind of fell off throughout the middle, but then the last hundred pages were gripping. While I feel it could have been shorter, so much was happening in the novel that I am not sure what could have been cut. Maybe I just don’t enjoy reading about drugs, but admittedly, they make for a plausible plot and are unfortunately a reality especially for many young people today.

Criticisms aside, what made Firekeeper’s Daughter stand out for me was its setting in Sault Sainte Marie, which is depicted as an interesting multicultural community across the river from Canada, and consequently, an entrance spot for crime into the United States. The depictions of the Native American community add a lot of flavor and color to the novel. At times, the use of Anishinaabemowin words felt a little overdone and I wished a glossary had been included, but most of the words and phrases could be understood from their context. Boulley certainly knows what she writes about, being herself a member of the Sault Ste. Marie Tribe of Chippewa Indians, and she captures the unique culture of the Ojibwa while realizing—and readers should also—that she cannot possibly speak for or depict all 574 federally recognized Native American tribes.

The Author’s Note in the back of the book is worth reading to understand Boulley’s inspiration for writing the book, from her early fascination with Nancy Drew to her own desire, as a Native American, to read books with contemporary characters she could identify with. Perhaps most importantly, she wants to raise awareness of the rampant violence that is still part of Native American women’s experiences. She states that 84 percent of Native women have experienced violence in their lifetime and 56 percent have experienced sexual violence. As a “young adult” novel, Firekeeper’s Daughter does not shy away from violence, sex, or drugs, revealing how much they may be part of young people’s lives.