Home Poetry Once Upon a Twin by Raymond Luczak

Once Upon a Twin by Raymond Luczak 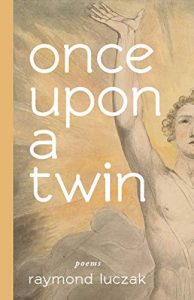 At first glance, one might find Luczak’s style of poetry more challenging to read than some because he uses no punctuation of any sort, not even an apostrophe. No capital letters either (though many poets skip capital letters). But then a reader may realize that each poem can be read different ways, depending upon where one wants to imagine the commas, and that can change the meaning, allowing for multiple interpretations of the same phrases and sentences. This can be mind-expanding.

The introductory poem in Once Upon a Twin, “9 months”, sets the theme. The poet’s mother had a miscarriage. But, she then discovered she was still pregnant, and when Raymond was delivered seven months later, at full term, the possibility that he had a twin becomes quite real. Looking back on all this as an adult, Luczak imagines what life might have been like had that twin lived.

In the section “ironwood”, we read poetic versions of what the poet’s childhood was like—a very difficult one since he is deaf and fairly early in his life realizes he is also gay. “battle preparations” let’s readers know in “Own Voice” things we might never even consider about the life of a deaf child: hiding his huge body hearing aids—which were strapped to his chest—seeing people obviously whispering about him and not knowing what was being said (except that it probably was not good); and others mixed with the “usual” things like ironing a clean shirt, and getting out the door on time, while always being left on the outside of “normal” activities.

Lists of words that are easy to lip read lets readers know that some words are simpler than others to discern because they are emphasized in shouts and anger—words that hurt. The prose poetry layout of “gods copper” tells us what makes an occasional good day:

but always grandma stood as if an angel fronted with an apron   with the aura of son through the pantry window    she picked out a shiny penny & pressed it onto my palm   as she looked deep into my eyes   she somehow understood I didnt need words    just some unfiltered communication . . .

Emotion runs deep in the poems as memories reveal a deaf boy simply trying to find his place in a hearing world. We feel what he goes through daily in “the tiniest snakes”, as the wires of his body hearing aid inside his shirt move down his chest. The words run down the page in the shape of the wires. Other stream-of-consciousness poems bring out what Luczak saw as hypocrisy in the church, the smoke of rising incense the symbol of many bad memories like resentment of not being allowed to use sign language while being laughed at over his “gravely speech”.

Even more illuminating are the poems in the “twinhood” section. Liczak speaks of his twin in many different ways. In “if you were my twin”, the imaginary friend is a defender against bullies. “In braided veins” that BFF is carried into adulthood, expressing how he’s still ignored at family gatherings and the hurt is relieved by a twin who really knows him: “we wouldn’t think of each other by name just a presence lingering in our braided veins”. This is followed by a poem of “what if” his twin had been a girl. Another poem gives a voice to the dead twin who does not like the fact of never having been given a name. The longing for true communication with his family comes out in “dream family language”:

The poetic scenes go on and on describing the painful price to a young boy rejected by his family, shunted from one foster home to the next to pretend he’s fine while knowing he doesn’t belong. The number of good quotes is almost unending. A few bright spots include the fact that in the fourth grade he has a friend and lets that friend know that he will not always be fat and the poet never saw him that way. The two make their way through that year as two “misfits” who see each other as human, not different. And that gives us all a lot to think about.

The final poem, “double helix kyrie”, is especially challenging. One can read it three different ways: plain print alone, italics alone, or running across both as the words intertwine, run back and forth, in and out, symbolic of DNA structure. It’s a grand finale to be contemplated over and over for its many different meanings and messages.