Dead of November: A Novel of Lake Superior by Craig Brockman

A Delightful Supernatural Tale of Mystery on Lake Superior 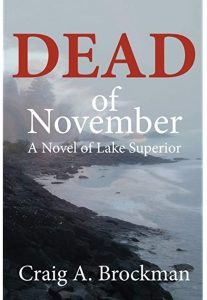 Dead of November by Craig Brockman

Craig Brockman’s debut adult novel Dead of November  is a spine-tingling psychological and  supernatural thriller which spans both American and Canadian shores of Lake Superior. The story follows psychologist Adam Knowles whose grief for the loss of his wife Julie LaFevre is so complete that it has driven him from his native U.P. abode of Sault Sainte Marie to the far reaches of Ft. Wayne, Indiana. As the story begins, Adam’s attempt to bury his past in his work as a substitute therapist for the past three years in a Ft. Wayne clinic has left him running on autopilot—he is listless and disengaged at best. A phone message from his former supervisor Ron Jarvin at County Behavioral Health in the Soo asking him to come back to work in the U.P. reignites the conflict in his soul. He must weigh his desire to achieve closure with Julie against his most painful memory.

At the apex of a perfect summer day on a remote beach on Lake Superior, his wife Julie heads into the surf for a quick swim while Adam drifts into comfortable nap on the hot sand. When he awakens, his beautifully stunning half-Ojibwe wife is nowhere to be found. Her body is never recovered and she is eventually pronounced presumed dead.  In the weeks and months following, he also loses his best friend and co-worker Cameron Jourdain who has taken up a hermit-like existence on a lakeside cabin to get his head straight after flirting with alcoholism and drug abuse. Cam has not been seen by anyone in years since he left without notice for Grand Marais. Both of these mysteries are very much on his mind as he makes the solo trip back to the Soo.

Although Adam is a superb therapist when he is running all cylinders, he has another gift which helps him.  He has been haunted his whole life by psychic dreams which sometimes eerily predict events to come. Adam briefly became a local celebrity when one of his dreams helped a grieving family locate the body of their daughter who had been abducted and later abandoned at Miner’s Castle outside Munising. Adam’s abilities will come in handy once he can pin down exactly why Ron Jarvin has summoned him back. To wit: dozens of people along the shore of Lake Superior (including Cam) have been seeing vivid visions of ghosts heading inland. These ghosts include native Americans, French fur traders, and the recently dead which retain the mannerisms and costumes of the living, although they are mute. It seems quite  contrary to Gordon Lightfoot’s maxim “Superior, they said, never gives up her dead when the gales of November come early.”

Once Adam arrives at the Sainte Marie Inn, things definitely get weird. Maggie Stewart, the Inn’s Scottish proprietor and widow is herself a retired psychic. The Inn itself has a creepy history as it is attached to a relic building of Fort Brady—a former infirmary of dubious repute now padlocked. Ron Jarvin is revealed to be the last of a line of Jesuit priests who are sacred protectors of Lake Superior. Together this unlikely trio must figure out what is driving the dead from the lake and may awaken the Mishipeshu, the Ojibwe’s “Great Lynx”, the master of all underwater beasts, which sleeps on the lake bottom.  Before they can do so, they must match wits with a renegade medicine man intent on stirring up trouble and team up with a young female Ojibwe agent who is part of a black ops extra-governmental agency tasked with psychic missions.

Brockman has a deft gift for scene-setting which creates a dense atmosphere of suspense.  Whether it is a recluse struggling to tell whether he is hallucinating  or the real life terror of a snow squall whiteout on I-75, you will be on the edge of your seat:

“Wind bullied the car and a charcoal cloud bank stretched northeast to southwest across the seamless gray. Hung beneath the looming clouds were ragged sheets of gray and white cascading to the ground. Adam watched nervously as the stately wind turbines, blades flailing, were overtaken and engulfed in the approaching maelstrom. His hands tensed on the steering wheel. A massive wall of cloud and snow leaned forward and dropped a curtain across the road, sending slithering, white snow devils under the tires. A set of headlights glared halfway into his lane as a van plowed through the median. Instinctive reaction caused him to swerve toward the shoulder, and by the time he had wavered back on course, the white had closed all around.”

Brockman’s Dead of November has at least two themes in common with stories from the legendary horror writer H.P. Lovecraft: a protagonist who doubts his sanity and ancient supernatural forces from the deep water come to wreak havoc. Dead of November revives Lovecraft’s tradition of the thinking man’s thriller and the book’s strong character-driven and emotional core makes it an appealing read for readers of all stripes. I rate this book “five Manitous”.