Houghton – The Birthplace of Professional Hockey by William Sproule

Could a Small Town in the U.P. be the Origin of the World’s Premier Winter Sport? 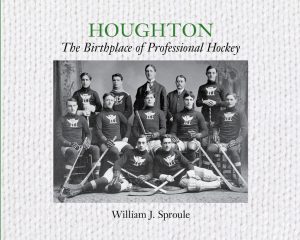 Houghton – The Birthplace of Professional Hockey by William Sproule

Dr. William Sproule, a recently retired professor of civil and environmental engineering from Michigan Tech University, wrote the new book Houghton: The Birthplace of Professional Hockey with the hopes of cementing the Keewenaw’s crucial role in the development of this sport. Specifically, he tells the story of how a Canadian-born dentist and Houghton entrepreneur changed hockey by openly paying players to come to the Copper Country to play hockey. In 1900, Jack “Doc” Gibson moved from Canada, established his dental practice, and joined the Portage Lake YMCA hockey team.  Gibson was already considered one of Canada’s finest players and led his newly joined team to win the Upper Peninsula Championship before going on to beat a Chicago team and hence be declared the “Champions of the West”.

By 1903, Gibson had teamed up with local businessman James Dee had hatched a plan to recruit the best players from Canada and openly pay them to pay for the Portage Lake hockey team—thus making them the first-ever professional hockey team. The team’s home ice was the newly built Amphidrome arena which replaced the previous Palace Ice Rink down on the Houghton waterfront.  The team did so well that they won the United States Championship in 1903 and 1904 seasons by defeating the Pittsburgh Bankers and Montreal Wanderers respectively.  Truly the Copper Country had become a hotbed of professional hockey prowess in this early period.  Sproule’s book concentrates on this period from 1900 to 1906 where the U.P. in general and Houghton in particular dominated the early seasons of professional hockey on this continent.  He includes full reprints of contemporary sports news stories, photographs of venues, players, and their jerseys and equipment.  Sproule does a deep dive into game statistics so you can learn the players’ names and how well they did game-by-game.

By now you’re surely wondering, how and why did this happen in Houghton, as opposed to Minneapolis, Detroit, or even Montreal?  Given that hockey was already the national pastime in Canada, why wouldn’t they have the first professional hockey teams?  It turns out that the Ontario Hockey Association (OHA) dominated the sport and their insistence on amateur teams eventually created the economic opportunity for Houghton.  The town was ideally situated with rail links, courtesy of the copper mining industry, to move players from Canada into the US and from that vantage being able to field a team to challenge American teams as far away as Pennsylvania.  The OHA’s amateur-only ethic was purely intended to keep working-class riff-raff off the ice so hockey could remain a gentleman’s sport.

Of course team managers in Ontario were always trying to find a way around the no-pay-for-play rules and ended up awarding gold watches, diamond rings, and five-star hotel stays to the players—virtually anything and everything except cold cash was paid out.  Even so, many top-tier Canadian players were eventually suspended for taking pay thanks to the cold-hearted John Ross Robertson, leader of OHA and prominent Toronto businessman. In one case, an entire team was suspended for accepting $10 gold coins as a reward for victory.  It didn’t take long before Canada’s best players headed south of the border where they could sign on with American teams as far away as Pittsburgh and earn some kind of a living at it. 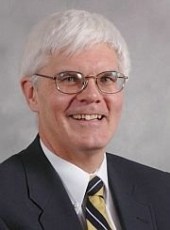 William Sproule, author of Houghton – The Birthplace of Professional Hockey

Sproule’s book excels in detail in the second half of the book where he dissects every game of those early seasons 1904, 1905, and 1906 where Copper Country teams ruled the professional leagues. Statistics for all the International Hockey League teams are provided, including teams from Calumet, Portage Lake, Michigan Soo, Canadian Soo, and Pittsburgh. Player-level detail shows Top Goal Scorers, Top Goalies, and even Penalty-Minute Leaders.

A detailed biographical section provides player portraits and bios of all Portage Lake players and Hockey Hall of Famers. A complete IHL player roster provides career details that you won’t find all together in any other book about early hockey history. Sproule also provides archival quality pictures of all the local area hockey venues including the evolution of Houghton’s Amphidrome, the Calumet Glaciadom, and Calumet Colosseum.  Last, but not least, a history of the Stanley Cup and McNaughton Cups provide historical backgrounds for these unique hockey award traditions.  Sproule even covers rulebooks and rule changes from the original one-pager to more sophisticated rules which evolved surprisingly quickly.

If you’ve got a taste for hockey nostalgia, the local history of the Copper Country, or you just enjoy one of Michigan’s most popular winter pastimes, you will enjoy William J. Sproule’s Houghton: The Birthplace of Professional Hockey for the humanity it brings to the players and their cold winter sagas of the early 1900s.