Wildlife Photography was Born in the U.P. 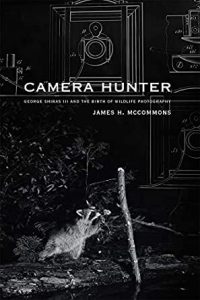 Outside of Marquette County, there may be few people who understand the full legacy of George Shiras 3d and his contributions to early wildlife photography, conservation of migratory birds, the study of North America’s land mammals, and of course philanthropy.  The new book Camera Hunter: George Shiras III and the Birth of Wildlife Photography by professor James H. McCommon (Northern Michigan University) goes a long way to set the record straight.

George Shiras 3d invented all the tools and techniques necessary for successful nighttime photography of wild animals in the 1890s – roughly 100 years before modern trailcams became ubiquitous. He pioneered his technique on his family’s private hunting camp which they aptly named Whitefish Lake. This locale, about 15 miles east of Marquette, was eventually handed over to the Nature Conservancy to manage and is now known as Laughing Whitefish Lake Preserve.

In George Shiras 3d formative years, he became the consummate sportsman enjoying the seemingly endless bounty of hunting and fishing in both the U.P. and western Pennsylvania during post-Civil War era. An itinerant student, he would often cut class from Cornell or Yale to indulge in some duck hunting. He was a member of the famous Boone & Crockett club, the most prestigious hunting preserve for the nation’s elite of that time. However, Shiras began to slowly see that the once endless supply of game including deer, migratory birds, and fish were disappearing from Michigan and the eastern seaboard from Florida to New York. Shiras epiphany about the disappearing fauna was to transform himself from a hunter with a gun to a “camera hunter”.

As mentioned earlier, Shiras had to invent a “flashlight” that could be synchronized with the camera shutter to produce a reliably exposed and focused image. Starting 50 years before the availability of commercial “flashbulbs” that you may remember from the 1970s, he used volatile chemicals which would ignite a huge and brief controlled explosion—well, usually controlled. Shiras and his companion John H. Hammer went on to patent several mechanisms like this as well as a “camera trap” whereby the subject animal would trip the flash and camera by stumbling into a baited tripwire. Shiras would try for nearly any animal and his pictures of deer, beaver, waterfowl, skunks, possums, and other creatures of the night are stunning.

Shiras photographs transformed an obscure nature journal with a circulation of 2,500 mostly Washington DC subscribers into the National Geographic Society magazine powerhouse with subscriptions in the hundreds of thousands that generations of Americans would grow up with as their first look at the world at large. He became a member of the Society’s board of directors after a brief stint in the Pennsylvania legislature.

As a legislator, Shiras sought to protect migratory birds such as the Canada Goose that were rapidly disappearing under the onslaught o a never-ending hunting season. He thought the spring hunting to be especially cruel as it resulted in the destruction of two generations of birds at once during the critical nesting season. At this time, each state in the union considered it had total jurisdiction over every bird or mammal that crossed its border—even if only for a week a year! Shiras had the vision to understand that effective species conservation could only happen on a federal level.  This was an unprecedented view in a time where States Rights reigned.

Shiras had an incredible ally in the form of Theodore “Teddy” Roosevelt.  TR was himself an avid sportsman and almost single handedly created the National Park system as well as many smaller wildlife preserves up and down the east coast. Shiras and Teddy Roosevelt became fast friends, with a rich correspondence, and Shiras was a frequent guest at the White House. Together, they helped craft the Migratory Bird Act as a first measure to stem the loss of species so that not all game birds would go the way of the Carrier Pigeon. The legislation was challenged by the Supreme Court and only preserved by a crafty move to enjoin Canada in an international treaty by which the question of states rights would be nullified.

McCommons had unprecedented access to lost Shiras 3d archives which he helped uncover at the University of Pittsburgh. Three boxes of previously unrecorded material were found at a remote suburban storage facility, including Shiras 3d’s unfinished biography and his personal correspondence with  Teddy Roosevelt.

If I have any criticism of the book, it would only be that I wanted more George Shiras 3d original photographs to be used. Time and archives being what they are, we only see a handful of the thousands of plates locked away in the vaults of the National Geographic Society. Perhaps someday the archives will be made available digitally to those of us who are enthralled by the pictures of wildlife 100 years ago. Luckily a few copies of Shiras’ Hunting Wild Life With Camera And Flashlight: Volume I can be found on ABEBooks and other online sellers of rare books.

Just listing Shiras accomplishments and influences on today’s modern conservation movement such as the Audubon Society, Ducks Unlimited, and the Nature Conservancy would take more space than I can possible write in this review.  If you have a love of the outdoors sporting life, bird watching, or just quietly enjoying the Hiawatha Nature Preserve, please give a salute to George Shiras 3D and consider learning more about one of the 20th century’s most influential characters in McCommons  Camera Hunter.