The Sunshine Room by Jan Kellis

Shining a Light on Life in the U.P. 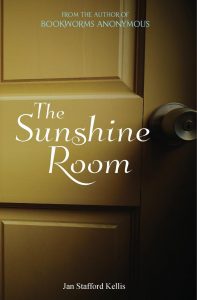 The Sunshine Room by Jan Kellis

The Sunshine Room, by Jan Stafford Kellis, is a meditation on family and the search for who we really are.  Kellis skillfully mixes equal parts mystery and family drama – with a dash of humor – to develop a book with many twists that reads a bit like a “who is it?” rather than a “who done it?”  By this, I mean we have threads, such as a teenage girl questing to find a father she never met (or even knew his name), as well as two daughters in search of a mother who is either missing or dead, depending on who they ask. The Sunshine Room spans multiple decades – from 1985 to 2008 – and the action is equally divided between Chicago and the U.P. as it slowly fills in the missing details for a denouement worth waiting for.  Did I mention the final Grateful Dead concert, on July 9th, 1995, of the Jerry Garcia era plays a pivotal role?

The story begins in 1985 with the first rupture of the family due to domestic violence as Elyse Elizabeth Nussbaum is abducted from her own home by Samuel Clark, her former abusive mate. He bears an awful proposition: either leave with him immediately, or he will sell her two toddler-aged daughters, Ellen and Stella, into slavery.  Eventually, Elyse escapes Sam’s clutches by crawling out the bathroom window of a gas station and fleeing into the arms of a stranger who has just finished filling up his Mercedes.  This stranger turns out to be lawyer, who becomes key in putting Sam away for good.  Because of her guilt at abandoning her daughters, Elyse never reconnects with them.

The Sunshine Room does have some satisfying family reunions, and though maybe you can’t go back, maybe you can find something new in this heartfelt tale.

Meanwhile, the toddler girls Ellen and Stella are stranded with Elyse’s husband, Jack Marchand, a dyed in the wool yooper with his own construction company, who barely knows what to do with them. Years later, Ellen becomes pregnant at 15 (by a boy she meets at the aforementioned Grateful Dead concert) and is immediately disowned as worthless by her father for her refusal to get an abortion. Ellen sees her only viable option is to steal one of her father’s pickup trucks, which is destined to be consigned to the scrapyard, and use that in a desperate escape to Chicago (the site of the concert). This is just the beginning of the story, for Ellen’s daughter, Althea, will grow up to be a teenager who is desperate to discover the dad she never knew. And Ellen and Stella will try to reunite with the abducted mother they never knew.  It makes for a heady multi-generational story about love and loss, and what is the real meaning of family.

Some much-needed levity is added by the description and denizens of the fictional town of Iron Falls in the U.P. There is plenty of opportunity for big city/small town culture clashes and misunderstandings. Althea’s teenage BFF Courtney puts it best:

“The UP is full of savages.” Courtney had her serious face on. She grabbed my arm to make sure I was listening. “There are no laws and people just do what they want. Hardly anyone lives there, because it’s so cold all the time and there aren’t any jobs and there’s more trees than anything else. Deer and skunks are everywhere. And wolves and bears.” She shuddered.

Iron Falls represents the peculiarities, really, of any isolated small town in America.  Elyse never stood a chance of being accepted in Iron Falls, because as Kellis points out:

But when people have known each other since before birth, when their great grandmothers played together long before there were Barbie dolls to play with, those people don’t want to let just any old interloper from out of town—especially one so beautiful and graceful and friendly—walk in and be part of the circle. That’s not how things work in the UP….

This is a conundrum that my own aunt and uncle faced when they moved to a small, northern Michigan town around 1970. They were spared only because they were a team of schoolteachers, and a whole generation of kids grew up knowing them as authority figures in their own town.

Also, as the story opens in the 2008 timeline, we learn that Jack Marchand, aka “Fossil,” is in a nursing home back in Iron Falls and hoping for some kind of reconciliation or maybe a reckoning.  Ellen and Jack have never mended ways after her escape to Chicago, and a road trip in the making with Ellen and Althea will put to the test the old adage that, “you can never go home again.”  We get to see Iron Falls through the eyes of Althea, and though she discovers that the U.P. is not exactly lawless, it does have its own unique feel, which is nothing she could have guessed.  I won’t give away any more of the story – believe me there is much, much more – but The Sunshine Room does have some satisfying family reunions, and though maybe you can’t go back, maybe you can find something new in this heartfelt tale.